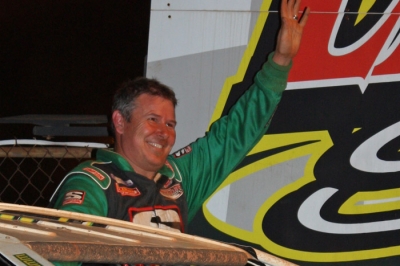 While mechanical problems took out a few of the pre-race favorites during the first half of the feature, Smith avoided any gremlins and distanced himself from Roffers for his 27th career series victory.

“We had a good car from the time we unloaded”, Smith said. “For the feature, I didn’t make quite enough adjustments, so at the end, I was just hanging on. I needed to be a little more snug from the center (of the corner) out than I was.

“I would not have even been here tonight if it had not been for Jim Baggerly. He let us use a motor, and it’s a dadgum good one.”

The caution flag flew numerous times inside of the first 20 laps of the 40-lap feature. The case of “yellow fever” started when the front of the pack was headed toward the flagstand to complete the second lap of the feature.

Fourth-row starter Justin Labonte, of Trinity, N.C., slammed the concrete of the inside wall in turn three, seriously damaging the nose of his Longhorn Chassis, ending his night.

Polesitter and early race leader Dennis “Rambo” Franklin, of Gaffney, S.C., was eliminated after leading the first 15 laps when the rear end failed under his machine, while fellow front-row starter Johnny Pursley, of Clover, S.C., parked after just five laps with similar problems.

Scott Autry of Autryville, N.C., challenged Franklin early after overtaking Smith and Roffers, who briefly tangled, but Autry was forced out of the race when electrical issues rendered his onboard engine monitoring gauges unreliable.

With Autry, Franklin, and Pursley in the pits, Smith inherited the top spot. During ensuing restarts, Roffers showed the strength of his machine and on a few occasions was able to pull alongside Smith to challenge for the lead.

Smith was also a benefactor of the pressure that Mike Gault, of Gaffney, S.C., kept applying to Roffers. Gault was able to secure the second position from Roffers at around the 14 laps to go mark, but Roffers aggressively took the spot back from Gault on the front straightaway a couple of laps later.

Roffers secured the spot by moving his No. 21 to the outside lane and across the nose of Gault’s car. Gault’s on-track actions afterwards telegraphed that he disapproved of Roffer’s move.

“I don’t know if it had anything to do with me, but it seemed like a lot of guys were bouncing off of me for some reason,” Roffers said. “I don’t know. I guess it’s part of the deal.”

Roffers added: “The car was pretty good. I thought we really had a good chance at winning the race. The cautions killed us, and the double-file restarts. We had a battle with the guy on the outside of us on every restart. That gave (Smith) just enough time to kind of get out there a little ways and then we would reel him in. But we just did not have enough time.”

At the finish, Smith beat Roffers to the checkered flag by a half-second while Gault was third. Hard charger Gary Mabe of Danbury, N.C., was fourth and Travis Yow of Fayetteville, N.C., rounded out the top five.

Notes: Smith’s Rocket Chassis is sponsored by En Compass Solutions. ... Scott Autry was forced out, but it turned out his car was OK. “When I got to second place and was running behind Rambo, my temperature and oil pressure gauges were out of whack and into the danger zone,” Autry said. “But when we got it back to the pits it checked out fine. We have an electrical problem here that keeps biting us. ... I just did not want to take a chance on hurting the motor.” ... Carolina Clash competitors have two more events, heading to Fayetteville Motor Speedway on Oct. 20 and wrapping up the season Oct. 27 at 311 Speedway in Madison, N.C. ... Lancaster hosts the $10,000-to-win GRITS 50, an unsanctioned event, on Oct. 27.