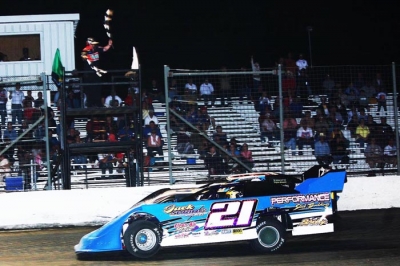 Sitton, of Baytown, Texas, had inherited the lead late in the race when officials black-flagged leader Chris Wall of Holden, La., who had suffered damage to the front of his car hitting an infield tire barrier. Sitton led at the white flag but his fuel pump started to fail on the last lap, and Davis won the drag race off turn four for the victory. Duke Whiseant of Texarkana, Ark., finished third followed by Kyle Cummings of Minden, La., and Howard Willis of Dayton, Texas.

Notes: The winning car is sponsored by Stuckey Enterprises, Jack Springs, PTS Racing Engines and Performance Steel Buildings. ... Davis last won on the SUPR circuit April 9, 2005, at Champion Park Speedway in Doyline, La. .... Rob Litton, winner over the previous SUPR event, was running third when he was collected by the slower car of Richard Mills on the 35th lap. ... The April 26 event at Houston Raceway Park was rained out. ... The next series event is scheduled for May 3 at ArkLaTex Speedway in Vivian, La.