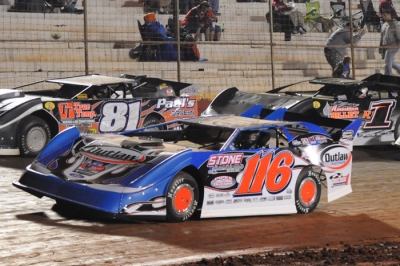 EASTABOGA, Ala. (Oct. 6) — Polesitter and series points leader Randy Weaver of Crossville, Tenn. completed a sweep of this season’s Southern All Stars action at Talladega Short Track with a $3,500 victory Saturday night.

Weaver’s third series victory of the season at the third-mile oval follows his June 23 triumph in the inaugural B.J. Parker Memorial and July 28 victory in the 15th annual Michael Head Jr. Memorial.

Brandon Kinzer of Allen, Ky., making a rare 2012 start, finished second on a night when a hurry-up program beat approaching inclement weather. Riley Hickman of Ooltewah, Tenn., was third ahead of 14th-starting Jason Heitt of Oxford, Ala., and consolation race winner Dingus Griffin of Alexandria, Ala., in a race that wrapped up before 9 p.m.

Aaron Ridley of Chatsworth, Ga., took the lead at the outset, but Weaver quickly moved up to challenge by the fifth lap. They ran side-by-side until Weaver went ahead for good on the seventh laps, two laps before the 40-lap race's only caution fell for Skip Freeman and Adam Martin.

With Weaver out front, Ridley had his hands full with Hickman, who eventually got the second spot but couldn't manage to pressure Weaver. Weaver was on cruise control working through traffic on the top and bottom of the track while Kinzer worked his way toward the front, taking second from Hickman with fewer than 10 laps remaining.

Kinzer managed to catch Weaver, but he couldn't make the pass at the finish, finishing just .004 seconds behind.

Notes: Weaver’s GRT Race Car is powered by a Cornett Racing Engine and sponsored by Outlaw Race Parts. ... Weaver has 19 career SAS victories including a series-leading five in 2012. ... Dingus Griffin, fifth in the Southern All Star event, won Friday’s unsanctioned tuneup and $2,000 as TST had a doubleheader weekend to complement NASCAR action across the highway. ... Former Daytona 500 winner Trevor Bayne led much of Friday’s feature before finishing fifth; he was 15th in the SAS event. ... Billy Ogle Jr. of Knoxville, Tenn., who had won the previous three Southern All Star events, wasn’t among 31 entries. ... The Southern All Stars move to Toccoa (Ga.) Speedway on Oct. 27 for another $3,500-to-win event. ... Talladega wraps up the season Oct. 20 with the Ice Bowl qualifier. ... Of course, Talladega gets things started in 2013 with the Ice Bowl on Jan. 3-6.