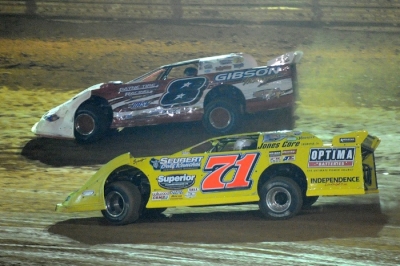 BRASSTOWN, N.C. (Oct. 4) — David Payne of nearby Murphy, N.C., led all the way Thursday at Tri-County Racetrack to become the first home-state winner of the ninth annual Tar Heel 50 at the Ray Cook-promoted oval.

Payne, who started outside the front row, earned $3,500 for turning back early challenges from national standout Don O’Neal of Martinsville, Ind., in the unsanctioned special. | Slideshow

"We've been close a time or two in this race, and it's neat to be able to put my name on the list of those who've won it,” Payne said. "It’s a special race in our home area, and it ranks right up there at the top of the races we've won. When those bigger names come to our backyard, it's pretty nice to find out we're able to hold our own and run with 'em.”

Payne drew away in the second half of the race in completing his victory while O’Neal settled for second. Tony Knowles of Tyrone, Ga., was third followed by Jamie Oliver of Murphy and Brian Reese of Sharpsburg, Ga., who rallied from his 14th starting spot.