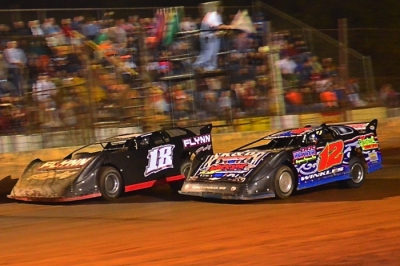 WINCHESTER, Tenn. (Sept. 29) — Completing a sweep of the weekend’s central Tennessee doubleheader, Ronny Lee Hollingsworth of Northport, Ala., topped Chad Winkles of Falkville, Ala., in a photo-finish at Winchester Speedway to claim a $3,000 victory in Saturday night’s unsanctioned Rebel 40. | Slideshow

Hollingsworth, who also earned $3,000 Friday night for a Southern Regional Racing Series victory at nearby Duck River Raceway Park in Wheel, Tenn., advanced from his seventh starting spot to fourth in the first 10 laps of the 40-lap race and stayed there until picking up the pace in the race's final 10 laps.

Hollingsworth picked off the cars ahead of him one by one and denied race-long leading Winkles with his late-race heroics. Winkles settled for second followed by David Gentry of Murfreesboro, Tenn., Tim Busha of Boaz, Ala., and Daniel Miller of Lynchburg, Tenn.

Winkles survived a lap-11 tangle with second-running Jackson Hale of Southside, Ala. Hale was charged with the caution and Winkles got his spot back.

Notes: Hollingsworth’s Flynn Motorsports Barry Wright Race Car is powered by a Clements Racing Engine with sponsorship from Waddle Trucking, Kelley Electrical Contractors and X-Treme Graphics. … The race’s caution came two laps for a Robert Gant spin. … Shannon Davis brought out the third caution on lap 13. … The final two cautions were for debris on lap 33 and a tangle between Hale and Scott Cook on lap 38.