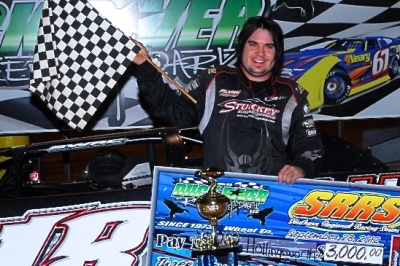 Riley Hickman of Ooltewah, Tenn., topped defending series champion Josh Putnam of Florence, Ala., in a back-and-forth battle for the runner-up spot with Daniel Miller of Lynchburg, Tenn., fourth and David Brannon of Huntland, Tenn., fifth.

Polesitter Tanner English of Benton, Ky., ran second for much of the event, but pulled to the pits under a lap-19 caution.

The 40-lap races was slowed by five cautions, the most series coming on the first attempt to start the race when a turn-one pileup necessitated a complete restart.

Notes: Hollingsworth’s Flynn Motorsports Barry Wright Race Car is powered by a Clements Racing Engine with sponsorship from Waddle Trucking, Kelley Electrical Contractors and X-Treme Graphics. … The previous track record was 12.494 seconds, held by Bub McCool of Vicksburg, Miss. … The victory is the third of Hollingsworth’s career on the SRRS tour and his first since winning at Duck River on March 6, 2010. … The SRRS tour returns to action with a $3,000-to-win event Oct. 19 at Boyd’s Speedway in Ringgold, Ga.