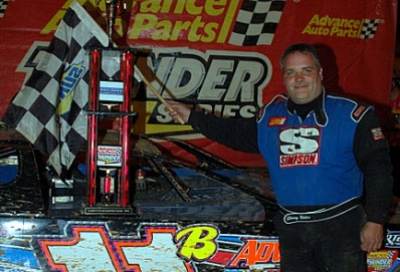 WARTBURG, Tenn. (April 26) — Taking the lead on the 17th lap when Rick Rogers got into a backstretch scramble with a lapped car, Stacy Boles of Claxton, Tenn., led the rest of the 50-lap feature at Wartburg Speedway for a $5,000 victory on the Advance Auto Parts Thunder Series. Rogers, of Knoxville, Tenn., settled for second three three-time series champion Anthony White of Clinton, Tenn., Joe Armes of Petros, Tenn., and Dan Tipton of Kingston, Tenn. rounding out the top five.

Tommy Kerr led early over Steve Smith, but the frontrunners were caught up behind lapped cars and sent to the tail for a lap-nine restart. Rogers cook the point but he, too, had trouble with traffic when he took tried to avoid Dewayne Pesterfield on the backchute and took an infield excursion that gave Boles the lead. Boles edged away during green-flag racing, but Rogers stayed close thanks to several more cautions. The final caution appeared on lap 41 when Mike Weeks stopped, and Boles stayed in control the rest of the way.

Notes: Boles DWB Race Car is powered by a David Hitch Racing Engine and sponsored by Advanced Transmissions, West Haven Speed Equipment and AFCO. ... Boles previous series victory came May 27, 2005, also at Wartburg. ... Anthony White got into the frontstretch wall on the first attempted start to draw a caution. ... The race was slowed by seven cautions in all. ... Early leader Tommy Kerr, sent the tail after a lap-eight caution, was also involved in a lap-21 yellow. ... Jeff Neubert of Knoxville, Tenn., was the Phoenix Conversions Hard Charger after starting 19th and finishing 11th. ... The next series event is May 3 at Volunteer Speedway in Bulls Gap, Tenn.