Whynot putting $15,000 on the line at Fall Classic 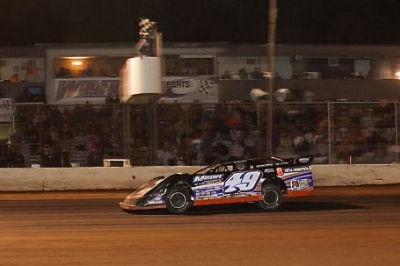 The late-season special returns for another year at Whynot Davenport of Blairsville, Ga., win a thrilling 100-lap main event that featured 12 lead changes among five drivers.

For the 18th consecutive year, many of the Dirt Late Model racing’s top national-touring stars and best regional competitors will converge on the southeast Mississippi facility to contend for a $15,000 winner’s paycheck at the racy third-mile oval promoted by Rodney Wing.

In 2011, Davenport topped a field of 61 Super Late Model competitors, representing 15 states to claim is first Fall Classic trophy. Davenport will likely be back to defend his title against a talented field of competitors expected to include other former event champions such as Wendell Wallace, Jimbo McDuffie, Chris Wall, David Breazeale, Brian Birkhofer, and Ronny Lee Hollingsworth.

Calls are already flooding in from drivers and fans for this year’s event, which could very well top last year's event to be the biggest in the history of the Coors Light Fall Classic.

Drivers please note that to ensure fair competition that the winner's check will be held for approximately one week pending tire test results from an independent laboratory.

Consolation races for all divisions will be contested on Saturday night along with the 18th annual Coors Light Fall Classic Championships. The pure stock division will contest a complete program.

Whynot will host a tune-up event Sept. 29. The Prelude to the Fall Classic will be headlined by a $1,000-to-win Super Late Models event and twin $500-to-win NeSmith Crate Late Model features. The program will also include action for modifieds, street stocks and pure stocks.