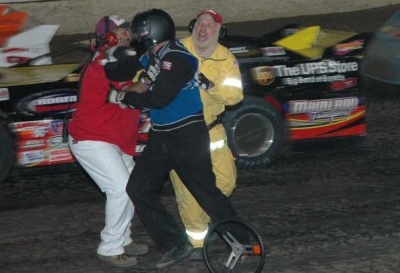 Shan Smith was upset after being spun. (karnac.com)

GIBSONTON, Fla. (April 26) — Starting 11th in the 29-car field, Johnny Collins of Jacksonville, Fla., raced to a $3,000 victory in the United Dirt Late Model Challenge Series event at East Bay Raceway Park. Collins took command on the 15th of 50 laps in a race slowed by nine caution periods as he dominated the reminder of the event. Josh Peacock, Keith Nosbisch, Rich Pratt and Jack Nosbisch Jr. rounded out the top five in the event postponed by rain April 5. Polesitter Jay Johnson ended up 16th.

Notes: Series points leader Shan Smith was running in the top five when he was spun on the backstretch while running in the top five. He climbed from his car angrily but track officials corraled him. ... The 49 cars was a series-high for the first-year tour. ... The next series event is May 3 at North Florida Speedway in Lake City.