Sullivan gets third straight Comp Cams win at I-30 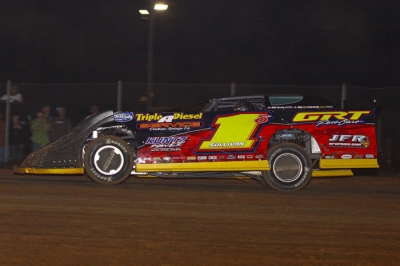 Sullivan was followed at the finish by seventh-starting Kyle Beard of Trumann, Ark., while Jon Mitchell of Texarkana, Ark., advanced from his ninth starting spot to finish third. Hometown driver Tommy Surrett started and finished fourth while Shane Harris of Sheridan, Ark., rallied from 18th to round out the top five. | Slideshow

As the caution-plagued event went green, Sullivan jumped to a lead that he would never relinquish. Chaos ensued early and often behind him as six cautions flew in the first eight laps.

The race’s most serious incident came on lap five, when top-five runners Jon Kirby, Morgan Bagley, and Jeff Floyd tangled. Floyd rolled over in the melee as his and Bagley's night came to an early end. Floyd sustained only minor injuries in the accident.

The early-race carnage eventually gave way as Sullivan maintained the lead while Beard worked his way into the second position. Beard was unable to make up any ground on Sullivan as the he motored away to the victory.

With his eighth-place finish, Kirby wrapped up the RiceTec/RiceSelect Summer Series Championship, earning $1,000 for his efforts.

Notes: Sullivan's GRT Race Cars house car is sponsored by Bryant Motorsports, Central Arkansas Pest Services, Triple A Diesel Service and DSI Motorsports. … The event was originally scheduled for Sept. 15 but was pushed back a week due to rain. … The victory is Sullivan’s six overall on the Comp Cams tour. … Sullivan’s previous two victories came Aug. 11 at Diamond Park Speedway in Nashville, Ark., and Sept. 8 at Northeast Arkansas Speedway in Harrisburg, Ark. … The Comp Cams Series heads for a doubleheader weekend at Thunderbird Speedway in Muskogee, Okla., Sept. 28-29 before wrapping up the season Oct. 13 at Riverside International Speedway in West Memphis, Ark.