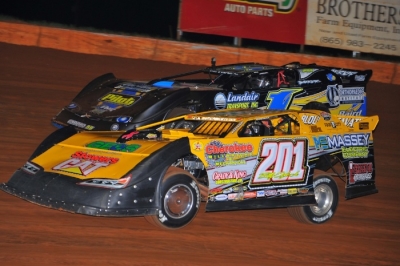 Ogle, whose five-race win streak has stretched over the past month and a half and included wins at three different tracks, started from the pole of Saturday’s 50-lap race and led every lap around Smoky Mountain’s 4/10-mile oval. | Slideshow

He was followed at the finish by Riley Hickman, of Ooltewah, Tenn., and hometown driver David Crabtree. Dillon Wood of New Smyrna Beach, Fla., and Vic Hill of Mosheim, Tenn., rounded out the race’s top-five finishers.

“The track was really to my liking. It just seemed like all the characteristics matched my driving style,” Ogle said. “It didn’t hurt to get the pole. Once you get out front the clean air helps ya and you can drive your own race. I think that’s a big difference.

“The big thing is my car. It’s really hooked up on the slick stuff right now, and we’ve really found a setup that’s working good here. I don’t want it to end. I want to win a few more before the end.”

Ogle darted to the lead on the start of the race with Randy Weaver of Crossville, Tenn., looking to make bid for the lead on the opening lap. But it didn’t take long for Ogle to seize complete control of the top spot as he pulled away to a near straightaway lead after only three laps.

The torrid pace set by Ogle was slowed repeatedly, however, as nine caution periods plagued the event. The first yellow flag waved with 11 laps complete and more followed with minor spins and flat tires claiming the likes of second-running Weaver and third-running Hill, Tommy Kerr and Mike Weeks. Some of the drivers involved in the cautions would continue but a number fell out as only thirteen machines were left running at the finish.

Ogle stormed back to a commanding lead following each restart as others fought for the right to chase him. In the beginning it was Hill and Weaver who battled for the runner-up spot but both had tire issues that would set them back. Eventually, Hickman and Crabtree waged a tremendous contest for the second throughout the second half of the race while Ogle remained out of reach.

Ogle was never seriously challenged for the top spot as he cruised to the victory and Hickman outdueled Crabtree.

Notes: Ogle’s Blount Motorsports No. 201 is a Rocket Chassis with a Custom Race Engine sponsored by Massey Electric, Stowers Cat, Cherokee Millwright and Mechanical, GEO Services, Blount Excavating as well as Grady and King Construction. … The victory is Ogle’s sixth of the season. His five-race win streak started in Southern Regional Racing Series action at Smoky Mountain on Aug. 11 and has included a Lucas Oil Late Model Dirt Series victory at Volunteer Speedway in Bulls Gap, Tenn., (Aug. 23) and a pair of SAS victories at Cleveland (Tenn.) Speedway (Aug. 18 and Sept. 15) to go along with his win Saturday. … The Southern All Star Series returns to action Oct. 6 with a $3,500-to-win event at Talladega Short Track in Eastaboga, Ala.