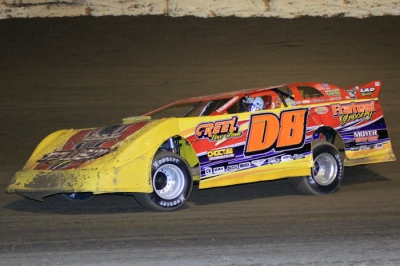 GREENVILLE, Miss. (Sept. 2) — In a wild and crazy night at Greenville Speedway, track regular Doug Showah of Indianaola, Miss., came out on top Sunday for his first career victory on the Southern United Professional Racing tour.

Showah earned $2,500 after pulling away from two-time SUPR champ and points leader Rob Litton of Alexandria, La., in an intense battle in the final laps. Litton settled for second with Zach McMillan, Jim Bryant and Lee Patton rounding out the top five in front of a frenzied crowd. | Slideshow

Tippen suffered an injury to his mouth and totaled his race car in a frontstretch wreck caused when lapped traffic became entangled with the leaders. Bo Gordon and Kyle Beard were among other cars caught up in the mess.

Showah, a Greenville fan favorite, marched out to a two-and-a-half second lead by lap 31, but Litton went back out front a few laps later when Showah made hard contact with the turn-two concrete wall.

The second-running Showah regained his momentum and began challenging the No. 6x of Litton, a car that suffered right-side damage in the lap-25 scramble.

Litton tried to keep his car in the low groove as the frontrunners battled in the 40-lapper. Showah rallied past Litton down the backstretch on lap 36 to go back ahead, and Litton couldn’t keep up in the final laps as eight of 21 starters were running at the finish.