Madden goes flag-to-flag for $4,000 at Cherokee 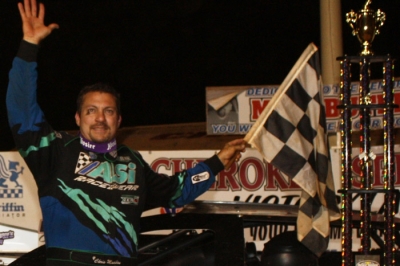 Chris Madden waves to his fans after his BEAST victory. (Gene Murphy)

It seemed fitting for Madden to break through for his first victory at Cherokee this year with such a commanding performance in an event that he is historically unmatched in. With his flag-to-flag win in Sunday night’s Hall of Fame race, the Gray Court, S.C., driver notched his fourth victory in just the sixth running of the annual event. He’d also won the race from ’07-’09.

The $4,000 victory was Madden’s first win on the Battle of the Eastern All Stars Tour and his eighth overall of the 2012 season. Casey Roberts of Toccoa, Ga., who won the previous night at Harris (N.C.) Speedway, finished a distant second about three-quarters of a straightaway behind.

“This has been our good car that we built to run the Southern Nationals,” Madden said. “We built it new and got a new motor from Clements, and we have not taken it to too many places because it is a jam-up piece. We have been trying to save it for all the big shows. But we have run so bad over here all year, I told the guys that I was not coming back without a good car.”

Madden set fast time and chose to start the feature on the outside of the front row. Second-fastest qualifier and BEAST points leader Johnny Pursley of Clover, S.C., started to the inside.

When the green flag flew, Madden immediately took control of the race and never looked back. With only one yellow slowing the 40-lapper, his biggest obstacle proved to be a couple of lapped cars he encountered on the way to victory.

Pursley finished third behind Madden and Roberts while Riley Hickman and Jeff Smith rounded out the top five in a thin 12-car field.

Notes: Madden’s Bloomquist Race Car is powered by a Clements Automotive Racing engine and sponsored by Century Plastics, Hamrick’s of Gaffney, VP Fuels, Allstar Performance, Extreme Cycles and Hoosier Tire South. ... During pre-race ceremonies, Billy Bishop, Johnny Hightower, John Pursley, and Glenn Sparks were inducted into the Cherokee Speedway Hall of Fame. ... With Carolina Speedway’s announcement of the cancellation of the King of the Carolinas, originally scheduled for Oct. 19-21, BEAST competitors will wrap up the season Oct. 13 at Gordon Park Speedway in Grovetown, Ga.