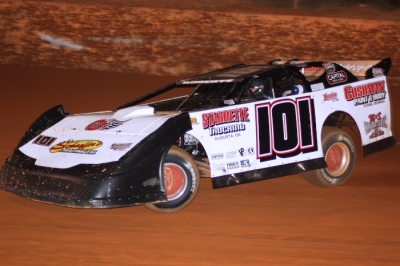 HARRIS, N.C. (Sept. 2) — Casey Roberts of Toccoa, Ga. picked up his second BEAST series victory of the season Saturday night at Harris Speedway, earning $4,000 as the first-year tour made its first visit to the 3/8-mile oval.

Roberts turned back repeated challenges from Chris Ferguson of Mount Holly, N.C., during the first half of the 40-lap feature and later pulled away from Jeff Smith of Dallas, N.C., after Ferguson dropped out with mechanical issues just past halfway. Smith scored the runner-up finish ahead of Riley Hickman of Ooltewah, Tenn., Mike Gault of Gaffney, S.C., and Ricky Weeks of Rutherfordton, N.C. | Slideshow

Roberts and Ferguson battled hard in the race’s early laps, going door-to-door a number of times while Ferguson’s car began trailing smoke after just a handful of laps.

Despite the smoke, Ferguson was still able to maintain an all-out pursuit of Roberts, using the low side to challenge for the lead.

“I was surprised at how good (Ferguson’s) car was on the bottom”, Roberts said. “He obviously had a really good car to be able to do that. He ran me real clean. It was a fun race.”

Roberts’ path to victory became much clearer just after the halfway point when Ferguson’s machine came up lame exiting the second corner. He was forced to retire from the race. A failed rear seal on the transmission was discovered to be the weak link that prematurely ended his night.

“We had a good, clean race with Casey there. Hopefully the fans enjoyed that, because we tried our best,” said Ferguson, who has had mechanical woes in a while contending in a number of events this season. “It’s kind of frustrating to do this again. We have a good program. Good motor, good shocks, good car… We are just hoping to turn the corner here soon and click off some big wins. … It’s just been a trying year.”

While the Roberts-Ferguson fight had been going on at the front of the pack, Smith had raced his way up behind them, trying to make it a three-car battle.

On his way to anchoring that spot, he pulled off a daring three-wide pass on the backstretch in between Hickman and Weeks to jump to the third position following a restart. After Ferguson fell out with the mechanical issues he moved into the second position behind Roberts.

In the closing laps, Smith was able to apply pressure to Roberts, but was never able to pull alongside to seriously challenge for the lead. At the fall of the checkered flag, Roberts’ advantage was about eight car lengths over Smith.

“I didn’t tighten my car up enough for as dry as the track got tonight,” Smith said. "We probably needed to go one or two more little adjustments further than what we did.”

Notes: Roberts drives a Capital Race Car sponsored by Starrette Trucking, Cushman Paint & Body and Schaeffer Oil. … Roberts became the first repeat winner on the tour after seven races. … The event was the first leg of a Labor Day weekend doubleheader for the series, which moves to Cherokee Speedway in Gaffney, S.C., on Sunday for another $4,000-to-win event.