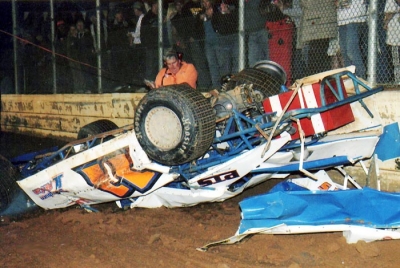 MAGNOLIA, Miss. (April 19) — When polesitter Kenny Merchant of Ruston, La., pulled away at the outset of the O'Reilly Auto Parts Southern United Professional Racing event at Pike County Speedway, Rob Litton was content to finish second on a night when rough track conditions plagued Late Model competitors. "Kenny Merchant had it won," said Litton, of Alexandria, La. "He was gone and we weren't even trying to catch him. We were just trying to take care of our stuff." | April recaps

But when engine problems knocked Merchant out of the 30-lapper on lap 19, Litton suddenly found himself in the lead and in a tussle with Dwight Falcon of Walker, La., through the late stages. Falcon took control on lap 21 when Litton caught a rut on a restart, but Litton worked his way back out front on the 26th lap and went on to complete the victory worth $2,500, the 13th of Litton's SUPR career and his first since Sept. 8 at Houston (Texas) Raceway Park.

Heavy rains on Friday pounded the track surface, and while track workers toiled during Saturday's perfect weather trying to get the oval in shape, rough conditions prevailed and officials decided to cut the feature to 30 from 40 laps. "It was really just a survival deal. Man, it was probably the roughest track I've ever been on," said Litton, happy that has car didn't suffer any real damage. "Other than just beating the body under the right side of the car, it was OK."

Falcon, who was eyeing his first career SUPR victory, settled for second ahead of reigning series champion Ray Moore of Shreveport, La. Corie Herberger and Duke Whiseant, winner of the previous O'Reilly SUPR event in Greenville, Miss., rounded out the top five.