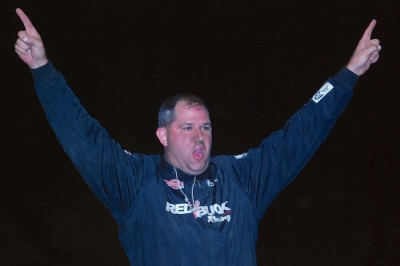 Dustin Neat climbed atop his car to celebrate his $7,500 victory. (DirtonDirt.com)

JUNCTION CITY, Ky. (Aug. 24) — From the beautiful weather to the overflowing crowd to the solid 37-car Late Model field, Friday was a pretty neat night at Ponderosa Speedway. Make that a Neat night.

The Dunnville, Ky., brothers who grew up racing at the 3/8-mile oval were the class of the field in the unsanctioned Colston Paving 60, battling up front most of the way with Dustin keeping his younger sibling Brad in Check for a $7,500 victory. | Slideshow | Video

Dustin Neat got the jump from the pole position but had his hands full with the third-starting Brad most of the way, fending off challenges through the first 15 laps and after a pair of restarts for his flag-to-flag victory.

“I seen Brad there two or three times, and I thought, ‘Surely he ain’t going to run over me or put me in the fence.’ I don’t put nothing past him,” the older brother joked in victory lane.

More seriously, the 36-year-old winner was concerned that his choice of harder tires might let his brother and fellow competitors had an advantage early in the race.

“I seen them guys rolling out here on (softer tires) on the left side, and I thought, ‘Oh no, I’m hard all the way around. I better get my butt in gear.’ But everything paid off and, wow, I’m tickled to death.”

Brad Neat pressured Dustin through most of the race, but Dustin built nearly a straightaway lead after 45 laps, then pulled away again by the same margin at the finish after it briefly got a little tighter. A deflating right-rear tire was apparently hampering the runner-up in the late stages.

Brad set fast time, and after starting in the second row of the main event, he wasn’t surprised that his No. 41 was dueling his brother’s No. 25 throughout the race.

No one was a match for the brothers, and only Mike Marlar of Winfield, Tenn. was able to keep up with them. But Marlar lost the third spot to Eddie Carrier Jr. of Salt Rock, W.Va., after a lap-33 restart as the Neat brothers pulled away from the field.

Carrier ended up third followed by Marlar and Dustin Linville of Bryantsville, Ky., in a race slowed by three cautions. Sixth-starting Greg Johnson’s spoiler was damaged by first-lap contact for a called back start, then he slowed on lap 19 to draw another yellow. A lap-33 caution appeared when Michael Paul Howard slowed on the backstretch at the same time that Michael Chilton’s No. 97 spun barely into the infield on the frontstretch.

Half the 22-car field was running at the finish with 10 cars on the lead lap.

Notes: The winner’s Longhorn Chassis is sponsored by Red Buck Cigars, Neat’s Service Center, D&R Livestock, NWN Distributing. ... His richest victory came last October with a $10,000 triumph in the Mac Metal Lake Cumberland Classic at Lake Cumberland Speedway in Burnside, Ky. ... Neat’s team found some issues with the car earlier in the week and he credited crew members Jordan, Darrell and Larry with helping him prepare. “They've worked their butt off for two days solid to get this thing ready,” he said. "We didn’t know if we were going to make it or not.” ... The event drew the biggest crowd of the season by far with spectators filling virtually every seat and spectator cars filled the overflow parking area. “We love it,” said promoter Larry Yantz, who said fan counts had been down. “It’s been a long hard summer.” ... The race was the track’s first in August after staying dark for three consecutive Fridays. ... A long line formed at the ticket booth that stretched 100 yards or more through the early evening. ... “I’m glad they had a great crowd tonight,” runner-up Brad Neat said. "These guys work really hard and they needed a little pick me up there.” ... The event drew 90 cars in three divisions. ... Eddie Carrier Jr. led virtually all the way in the first heat, but D.J. Wells nipped him at the checkers to earn the pole for the main event. “It was close,” Carrier said. “I though I was out ahead a little. ... usually you can tell.” ... Among drivers failing to make the feature lineup: David Webb, Ricky Arms, Johnny Wheeler (subbing in Tim Taylor’s No. 55), Justin Rattliff (broke rocker arm in prelims), Skylar Marlar (broke engine leading consolation), Jeff Watson, Brandon Hardgrove, Wesley Brummett and Dennis Roberson. ... Ponderosa’s next Super Late Model special is Oct. 5-6 with the $1,500-to-win Friday Night Rumble and the $4,000-to-win Fall Classic. ... The season-ender is scheduled for Oct. 20.