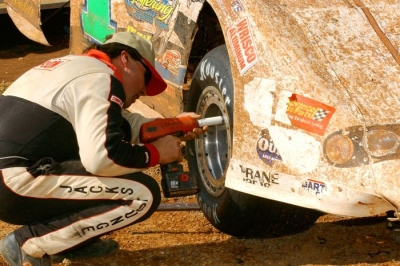 TAZEWELL, Tenn. (April 20) — Repelling a last-ditch charge from Jimmy Owens at Tazewell Speedway, John Gill of Mitchell, Ind., grabbed his first 2008 victory in the Warrior Race Cars house car for a $3,000 payday on the Advance Auto Parts Thunder Series. Gill, showing damage from a collision with a lapped car late in the race, led all the way but had to survive a final charge from the fast-qualifying Owens, who took second from Mike Weeks on the 48th lap and took a crack at the lead on lap 49. | April recaps | Slideshow

Owens, of Newport, Tenn., settled for second ahead of Weeks of Friendsville, Tenn., Vic Hill of Greeneville, Tenn., and Steve Smith of Powell, Tenn., in the third annual Thunder Thaw 50, an event postponed six times before finally running on a Sunday afternoon