Franklin tops Autry for $4,000 at Fayetteville 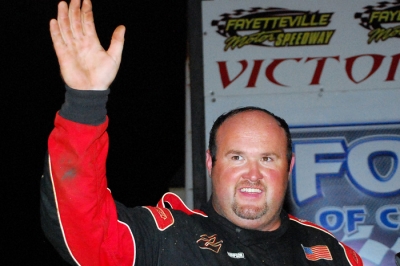 Franklin earned $4,000 for capturing the Shirley Autry Memorial, then decided to hand off his winning trophy to the runner-up Autry, whose stepmother was honored in the second annual event at the 4/10-mile oval.

Johnny Pursley of Clover, S.C., finished third followed by Dean Bowen, who recovered from an early wreck in making his first start in a Norman Nichols-owned No. 3. Damon Kotke of Louisburg, N.C., finished fifth in his second career series start.

"They threw us for a loop on the racetrack. It was really good tonight,” He said. "It’s like they had soap in the dirt and I didn’t tighten up. I smacked the wall two (or) three times on the inside (in turns one and two). It’s so slick out there, if you go to skating, then you bite up and it’ll just drive you into it. Scott drove me a really, good, clean race.”

Autry, trying to win his stepmother’s race for the second straight year, said he didn’t have enough drive exiting the corners to keep up with Franklin.

“(I) gave Rambo a thumbs up after because he had the best car,” Autry said. "Me and Pursley were about tit for tat. If we could have had a good long run ... but for the last few races, we’ve had a lot of cautions. I noticed we could fill in the gap a little bit when we got long runs. But my hat’s off to Rambo, I like racing with him, I like racing with Johnny. ...”

"I tried everything I could to get the car to stay up under me, but it was loose. Second place ain’t a bad spot. I would liked to have had another for Shirley, but you’re not going to win them all.”

The event sets up the tour’s five-race Chase for the Championship, with the points reset with Luke Roffers on top of the chase ahead of Ricky Weeks, Pursley, Jeff Smith, Autry and Franklin. The season-ending miniseries opens Sept. 8 at 311 Motor Speedway in Madison, N.C.

Notes: Franklin’s Barry Wright Race Car is powered by a Clements Racing Engine and sponsored by AES Racing. ... Runner-up Scott Autry celebrated the race by giving away dozens of bicycles, skateboards and toys to children in attendance. "I’m just glad everybody showed up and (for) giving stuff away to the kids,” Autry said. “It wouldn’t do for me to win a big lottery because I could have a good time with a bunch of people. I would be on TV after about 15 years, “What did you do with your money?’ ” ... Fourth-finishing Dean Bowen plans to make more starts in the Barry Wright Race Car owned by Norman Nichols, one of Franklin’s major sponsors. ... Fifth-finishing Damon Kotke usually runs weekly steel-head Late Model events at County Line Raceway in Elm City, N.C. ... Ricky Weeks parked his Longhorn Chassis and drove his Rocket, finishing 15th. ... Jeff Smith was eliminated in a wreck on the opening lap. ... Points leader Luke Roffers retired after 16 laps with apparent transmission problems. ... Thirteen of 26 starters completed 40 laps. ... Fourteen were running at the finish.