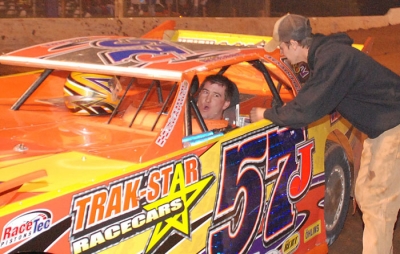 MERIDIAN, Miss. (April 19) — Bub McCool of Vicksburg, Miss., overtook David Ashley near the midpoint of the 50-lap feature and led the rest of the way at Whynot Motorsports Park for a $2,500 victory on the Mississippi State Championship Series. "The longer the race went, the stronger my car got," said McCool, whose Trak-Star Chassis has a Tony Barker engine and sponsorship from McCool Logging. "Someone said that my right rear tire looked like it had another 50 laps left on it even though I went on the softer tire. My car worked best up top, but I had to get by David on the bottom. Once I took the lead I could run anywhere on the track I wanted." | April recaps | Slideshow

Ashley, last year's MSCC champion, had to settle for second, 10 lengths back at the quarter-mile oval where he won last year's $15,000 Fall Classic. "Nobody had anything for Bub tonight," the Zachary, La., driver said. "I'm glad to get a second out of it. I was strong early on but after the middle portion of the race, Bub's car was awesome. There toward the end of the race I had completely burned up my right rear tire, so to get a second-place finish tonight is not too bad."

Rounding out the top five in the 50-lapper were Jason Cliburn, Mike Boland and former track champion Jim McDuffie.

Polesitter Scott Slay of Clinton, Miss., established himself early by outgunning fellow front-row starter David Breazeale from the outset. Slay held the point until his engine erupted into flames, although he was able to return to the track later after his crew found a pinhole in the oil filter that had allowed hot oil to spew on to header pipes. "That's racing," Slay said. later. "I guess a rock hit it or something. It's a shame because we had a great car and I believe we had a shot to win it."

Justin McRee ran as high as second, but he lost an engine late in the race while battling Cliburn for third. "It must have slung a rod or something major." McRee stated while peeking into the engine bay of his No. 25. "It tore a hole all the way through the block."

Former MSCC champion David Wall of Holden, La., restarted on the rear of the 19-car field after an early caution but rebounded to finish sixth.