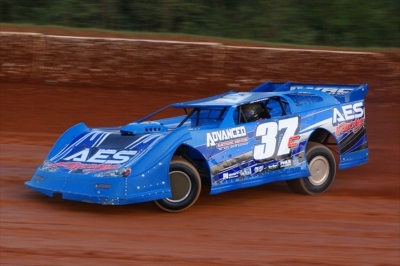 Dennis Franklin gets rolling at Carolina Speedway, where he won his third Shrine Race. (Randy Houser)

Franklin and Ferguson engaged in a tight battle for the lead over a 20-lap stretch. When the frontrunners faced lapped traffic exiting turn three, they made contact and Ferguson spun off turn four, then headed for the pits after 31 of 35 laps.

Franklin restarted out front to lead the final four laps and win the Shrine Race for the third time in his career.

Wayne Hughes of Ghent, W.Va., scored a second-place finish for his best career performance on the series. Ross Bailes of Clover, S.C., was third while 17th-starting Ricky Weeks of Rutherfordton, N.C., and Jeff Smith of Dallas, N.C., rounded out the top five finishers.

Ferguson was scored 11th in the final rundown while Luke Roffers of Conford, N.C., who entered the event leading the series points, finished ninth after being involved in a first-lap accident on the backstretch and pitting several times.

Johnny Pursley was in the middle of the first-lap accident, and his car sustained major damage as it tumbled down the backstretch. No injuries were reported.