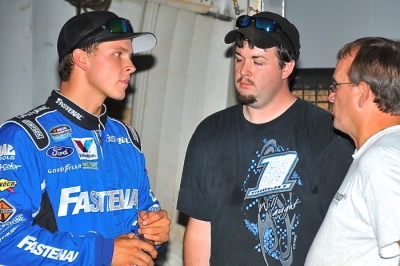 Smoky Mountain Speedway has hosted some of the biggest names in racing history over the years. NASCAR once raced regularly at the Maryville, Tenn., racetrack throughout the 1960s with several of the sport’s legendary drivers roaring around the facility on both its dirt and asphalt configurations. | Ogle wins SRRS event

Richard Petty, David Pearson, Dick Hutcherson and Bobby Isaac are among the legendary names from the NASCAR ranks to have won at The Mountain.

On Saturday night, another NASCAR star added his name to the roster of those to have competed at Smoky Mountain Speedway, as 2011 Daytona 500 champion Trevor Bayne made his Dirt Late Model debut on the 4/10-mile clay oval. The native of nearby Knoxville, Tenn., had previously tested on the track and wanted to get in some competitive laps as he looks to further his involvement in Dirt Late Model racing.

The Southern Regional Racing Series event was the feature attraction on Saturday’s racing card, but Bayne provided interest in the night’s Limited Late Model event as he climbed behind the wheel of a CVR Race Car furnished by east Tennessee regular John Cobb.

Bayne was one of 24 drivers on hand for the Limited Late Model event, with virtually all the other drivers holding much more experienced on dirt. The NASCAR star qualified a very respectable seventh with a lap of 17.42 seconds, compared to a time of 17. 27 seconds posted by pole sitter David Crabtree.

The qualifying effort was just the first step of Bayne’s goal to become more comfortable in the seat of a Dirt Late Model.

“With as limited number of laps as I have in these things, every lap’s going to make a big difference,” said Bayne, who hopes to make his Super Late Model debut in the Aug. 23 Lucas Oil Late Model Dirt Series event at nearby Volunteer Speedway in Bulls Gap, Tenn.

Due to a looming curfew, track officials decided to cancel the night’s scheduled heat races and set the feature lineup based on qualifying times. While Bayne was assured of a decent starting spot, the circumstances may have worked against him in taking away much-needed seat time that a heat race would have offered.

Bayne did his best to adapt to the situation. While other divisions were on the track, Bayne did not stay hidden in the back of a hauler. Rather, he spent much of his time standing near the entrance of turn one watching the veteran drivers work their way around the speedway in hopes of picking up tips as to how to get around the track faster. He also spent time talking to and asking questions of dirt stars such as Ronnie Johnson, Dale McDowell and fellow NASCAR competitor Ty Dillon.

“I was here for the opposite of appearances,” Bayne said. “I came here to learn and try to get some seat time before we go to Bulls Gap.”

At the start of the feature Bayne raced hard but carefully as he ran among other cars for the first time. As the race wore on it was obvious the driver was gaining confidence as he drove the car harder around each turn.

For the most part, Bayne raced around the back of the top 10 with the likes of veteran east Tennessee drivers Matt Henderson, Mark Rosner and Steve Smith.

After a late-race caution set up a green-white-checkered finish, Bayne decided to push his car closer to the limit in hopes of gaining experience under pressure and moving up the leader board.

Unfortunately, things didn’t work quite as well as he hoped. The right rear of his car scraped the outside wall in turn one, causing the front end of his car to jerk around and into the wall as well. The wreck ended his night a little earlier than hoped. He was scored in the 12th position at the finish.

“I was just trying to learn,” Bayne said of the single-car incident. “I wasn’t driving it really hard enough (earlier in the race), and I tried to on the restart and it wasn’t the time to try it. There were marbles up there and it didn’t work out real good.”

As far as the night as a whole was concerned, Bayne considered his first foray into Dirt Late Model competition a success. “I learned a lot and I had fun,” he said. “That’s what I came to do.”