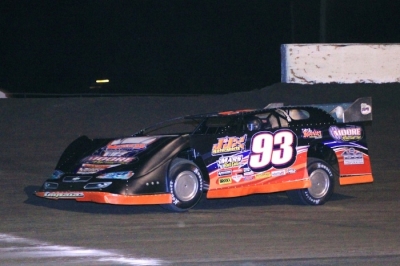 Moore survived a deflating tire late in the race to continue his recent hot streak that’s turned around his slow start to the season.

"Our luck has turned around from earlier in the season. This team has been strong all year, but we have started putting out the finishes to show for it lately,” said Moore, who's earned all five of his 2012 series victories in the past two months. “I do not believe we could have made more than another lap or two out here tonight because when I got the car back to the trailer, (the tire) was on its rim. I am not sure how that happened.”

The victory came in Moore’s first trip of the season to Greenville and his first time competing on the quarter-mile gumbo oval since a concrete wall was installed around the out side of the track.

Moore struggled to adjust to the new wall at first, making substantial contact with the barrier on his way to a heat race victory.

"I only hit the wall once tonight, but it was hard and happened in my heat race. It tore up a lot of stuff that we had to fix before the feature,” said Moore, the 2007 SUPR champion. “The track was top-side dominate all night; you couldn't really run the bottom.”

Starnes earned his best SUPR finish of the season in only his third night in brand new MasterSbilt by Stuckey Race Car. He had one shot at the lead late in the race when Moore pushed up the track in turns three and four. Moore’s misstep allowed Starnes to close the gap, but he never made a serious challenge for the lead.

Litton’s third-place finish broke his tie atop the series standings with Allen Tippen of Minden, La. With Tippen’s 16th-place finish, Litton now enjoys a 64-point lead as he chases his third series title.

Fore, the 2010 Greenville Speedway track champion, started 7th and capitalized on a late surge to score a solid top-five finish while Frazier earned the race’s hard charger award with his run from 18th to fifth.