McDowell dominates in victorious return to 411 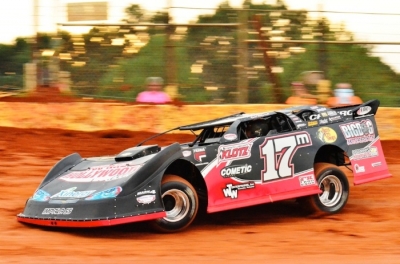 Dale McDowell tunes up before his SRRS victory in Seymour, Tenn. (photobyconnie.com)

SEYMOUR, Tenn. (Aug. 10) — Winning in his first visit to 411 Motor Speedway in more than 20 years, Dale McDowell of Chickamauga, Ga., took the lead immediately from outside the front row and led all 40 laps Friday night.

“There at the beginning, and with all the events that went on before us, I thought the groove was going to be around the top,” McDowell said. "So I stayed up around the top, and I actually saw Billy Ogle get under me there a little bit. So once I cleared him, I got back to the bottom.

As other drivers had throughout the night from outside the front row, McDowell bolted into the lead at the outset with the race briefly halted to retrieve Smith’s wheel on the first lap.

McDowell went quickly back to work, entering lapped traffic after just seven circuits while Ogle and Brett Miller of Greeneville, Tenn., gave chase. Ogle drew closer to McDowell with each slower car, but McDowell cleared the traffic and edged back away again.

Behind the lead trio, the likes of Vic Hill, Riley Hickman, David Crabtree, Dingus Griffin, Tommy Kerr and Ronnie Johnson — piloting the No. 1G Warrior Race Cars house car — were embroiled in a sheetmetal banging slugfest for positions within the top 10.

At times those drivers found themselves three-wide along with lapped cars while maintaining the hammer-down pace required to keep the leaders in sight on the lightning fast track.

McDowell was always able to maintain at least two to three car lengths of distance between himself and Ogle during the race’s second half in taking the victory ahead of Ogle, Miller, Hill and Hickman. McDowell’s Team Dillon Racing teammate Ty Dillon finished 11th.

“Sometimes, the traffic works for you, because I knew as much as I was having to struggle to get around some of the lapped cars, that those guys behind me would have to do the same thing,” McDowell said. "The cautions do help you as far as getting open racetrack, but once you get in rhythm, you just take it as it comes. It worked out OK with us.”

Notes: McDowell’s Team Dillon Racing No. 17m is sponsored by YouAreHollywood.com, Big Dog Motorsports, Klotz, Cometic and Mark Martin Chevrolet. ... McDowell notched his fifth victory overall in 2012 and first since a BEAST-sanctioned event July 3 at Cherokee Speedway in Gaffney, S.C. ... The start of the night’s activities were delayed briefly when dark clouds and lightning blew past just before the schedule start time. .... Moisture from rains earlier in the day and week made for a fast track and Billy Ogle Jr.’s 13.092-second lap broke the track record. ... Ray Cook held the previous mark of 13.540 seconds. .... Adam Beeler won the night’s Crate Late Model feature. ... SRRS competitors head to Smoky Mountain Speedway in Maryville, Tenn., for a Saturday night event.