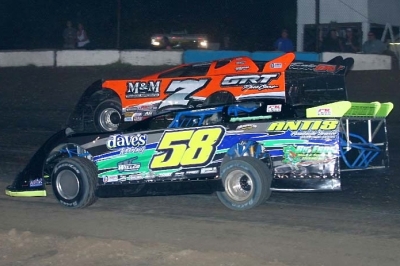 Whitener drew the fourth starting spot in a redraw among heat race winners, but made his way to the front to overtake polesitter Ryan VanSickle on lap 34 of the 50-lap race. Whitener led the remaining distance en route to his second series victory of the season and 13th of his career.

Notes: Whitener’s Big Frog Motorsports Barry Wright Race Car is powered by a Koury Engine with sponsorship from Dave’s Towing, Antis Roadside Service and Towing and Hi-Way Automotive. … Whitener’s 13 series victories is second to Ivedent Lloyd Jr.’s 15 wins on the tour’s all-time wins list. … Whitener and Augspurger trail Nosbisch with five races remaining in the chase for the tour’s $10,000 championship. … The next series event is another $3,000 event slated for Sept. 1 at North Florida.