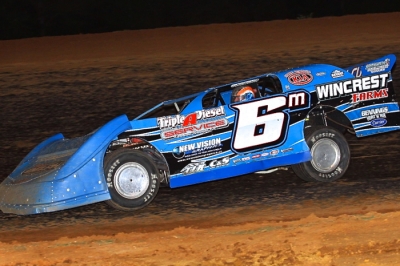 Wendell Wallace heads for victory at I-30 Speedway. (Woody Hampton)

LITTLE ROCK, Ark. (Aug. 4) — The winningest driver in Comp Cams Super Dirt Series history increased his advantage on the regional tour’s all-time wins list with a charge to the front in Saturday night’s series race at I-30 Speedway.

Wendell Wallace of Batesville, Ark., raced to his second Comp Cams Series victory of the season and 14th overall in Saturday's 35-lap feature, topping Timothy Culp of West Monroe, La., for a $2,000 victory at the 3/8-mile oval. | Slideshow

Wallace first cracked the top five by lap 10 and continued his march until overtaking early leader Frye on lap 19.

Once out front Wallace set sail as the battle behind him heated up with Frye, Kirby, Smith and Culp all waging war for the second spot. When the checkered flag dropped Culp was the driver to follow Wallace across the finish line.