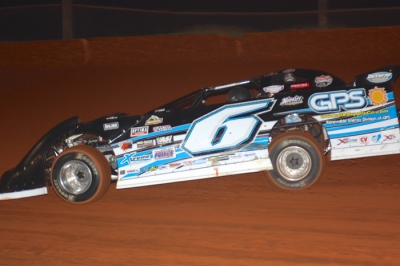 “I have always wanted to win this race”, Shaver of Vienna, W.Va., said in victory lane following the Battle of Eastern All Stars Tour event. “My hat’s off to Stick Elliott’s family, and I am just glad to now be a part of it.” | Slideshow

From the first moment Shaver’s familiar Leroy and Kevin Rumley-owned No. 6 machine hit the track, it was fast. That was a trend that would continue throughout the evening.

Shaver topped the event's 21 qualifiers during time trials and chose the outside of the front row for the start of the 40-lap race, putting second-fastest qualifier Casey Roberts, of Toccoa Ga., to the inside.

Shaver used the high line to maintain momentum exiting turn two on the opening lap and flexed the muscle of his potent powerplant down the back straightaway to beat Roberts into turn three. He then closed the door on Roberts exiting the fourth corner to lead the first lap.

Shaver never relinquished the top spot, leading ever lap for a convincing victory at the 4/10-mile oval. Johnny Pursley of Clover, S.C., moved by Roberts for second, shuffling Roberts to third at the finish ahead of Chris Madden of Gray Court, S.C.

After suffering a flat tire late in the race, hometown driver Dennis Franklin quickly rallied through the field, using the high side to climb all the way to fifth before the finish.

Shaver, who earned his second victory of the season, will now look to carry his luck and momentum with him to another race he’d really like to win, the $50,000-to-win Sunoco Race Fuels North-South 100 Aug. 10-11 at Florence (Ky.) Speedway.

“I have my good luck charm here with me tonight, my son, Dylan,” Shaver said. “I think we are going to take him to Florence next week.”

Notes: Shaver's K&L Rumley Motorsports Rocket Chassis is sponsored by GPS Supply Company, CV Products, Sunoco Race Fuels and Hoosier Racing Tires. … Shaver’s only other victory this season was a $10,000 victory at Virginia Motor Speedway in May. … Shaver is the sixth different winner in six events for the first-year BEAST series. … The tour takes some time off before a doubleheader Sept. 2-3 at Cherokee and Harris (N.C.) Motor Speedway.