Hollingsworth survives for $5,000 at Columbus 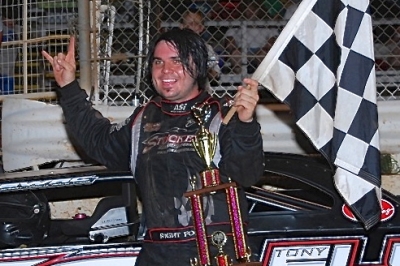 COLUMBUS, Miss. (Aug. 4) — Ronny Lee Hollingsworth of Northport, Ala., turned back a late challenge from Dane Dacus of Arlington, Tenn., and a survived a close call in lapped traffic Saturday night at Columbus Speedway on his way to earning $5,000 for a flag-to-flag victory in the 11th annual James Nickoles Memorial. | Slideshow

Starting from the outside pole in the 50-lap Mississippi State Championship Challenge Series event, Hollingsworth jumped to the lead over polesitter Jeremy Broadus at the initial green flag and controlled most of the distance at the high-speed 3/10-mile oval.

Third-starting Dacus moved to second early to trail Hollingsworth most of the way before turning up the pressure just after the 10-to-go mark. Dacus made his most serious bid for the lead on lap 43 when he dove under Hollingsworth entering turn one and attempted a slidejob through the corner. But his move came up short as Hollingsworth pulled back ahead.

That was as close as Dacus got to the lead with his own efforts, but he was nearly handed the position four laps later when the slower car of Rick Rickman tagged the wall in the middle of turns three and four just in front of Hollingsworth.

The right-rear corner of Hollingsworth’s car made contact with Rickman in the resulting scramble, but Hollingsworth maintained control and held on to the lead.

Hollingsworth held Dacus at bay through the final three-lap run to the finish, scoring the fourth MSCCS victory of his career and first this season.

Coming up just short of his first-ever series victory, Dacus settled for second ahead of series points leader Scott Dedwylder of Vosburg, Miss. Eric Cooley of Fulton, Miss., was fourth with Tanner English of Benton, Ky., rounding out the top five.

The most serious of the race’s cautions came just after the 10-lap mark when Chad Thrash of Meridan, Miss., and Jeremy Broadus of Biloxi, Miss., tangled on the front straightaway while battling for the fourth spot. Former series champion David Breazeale of Four Corners, Miss., was caught in the wreck, slamming into the wall and causing heavy damage to his race car. No injuries were reported.

Notes: Hollingsworth’s Flynn Motorsports Barry Wright Race Car is powered by a Vic Hill Racing Engine with sponsorship from Waddle Trucking, Kelley Electrical Contractors and X-Treme Graphics. … The victory is Hollingsworth’s fourth overall this season and second at Columbus. … A tangle between Dacus and Breazeale in turns one and two caused the only caution in the top-eight dash. The incident was called on Breazeale as he went to the back and Dacus got the third spot back. … Josh Putnam of Killen, Ala., discovered that his left-rear tire was flat during driver introductions. He went to the pits and had the tire changed in time for the start, but had to give up his 12th-starting spot. … The MSSCS returns to action Aug. 17-18 with a doubleheader weekend at Hattiesburg (Miss.) Motorsports Park and Whynot Motorsports Park in Meridian, Miss.