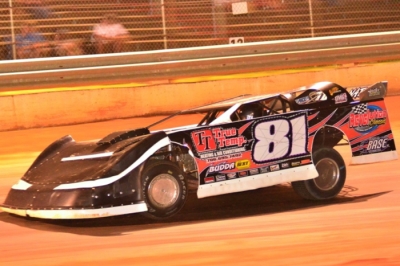 Ridley earned $3,000 for his first victory at Boyd’s quarter-mile oval in topping Cook and Jake Knowles of Tyrone, Ga., at the finish. Jason Welshan of Maryville, Tenn., was fourth with Todd Morrow of East Ridge, Tenn., rounding out the top five finishers.

Ridley grabbed the lead over Cook on the start and held the top spot through a 15-lap green-flag run to start the race. The first caution appeared when Skip Arp of Georgetown, Tenn., slowed in turn one.

Fluid leaking from Shane Tankersley’s race car caused the race’s third caution on lap 31, and a tangle between Brett Holmes and Jay Scott on the restart caused the fourth and final yellow flag.

Cook pressured Ridley on each of the restarts, but Ridley held on for the victory.

In victory lane, Ridley dedicated his win to Biddle Ridley, a family member that passed away earlier in the week.