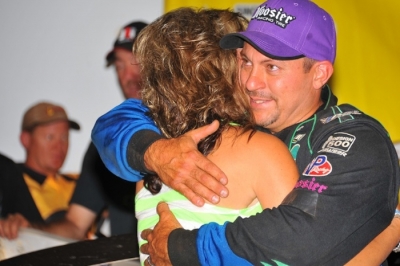 TAZEWELL, Tenn. (July 28) — Chris Madden let it be known that the Schaeffer Oil Southern Nationals Series are his own personal playground as he put an authoritative stamp on the 2012 version of the 10-race series with a dominating victory in the series finale Saturday night at Tazewell Speedway. | Slideshow | Video

The Gray Court, S.C., driver led the 53-lap race flag to flag, negociating heavy lapped traffic on his way to earning $5,300 for his fourth victory on this year’s tour while also wrapping up his fourth championship on the Ray Cook-promoted series.

“It was kinda hairy in lapped traffic. Seemed like every time I caught ‘em they was two wide,” said Madden, who was greeted by wife Stephanie in victory lane. “This is a big deal for me to get to race with the support of my family with my wife and kids and everybody. I love it.”

Brad Neat of Dunville, Ky., looked under Madden a few times in traffic during the race, but settled for second at the finish ahead of Mike Marlar of Winfield, Tenn., who secured the second spot in the final series standings with his third-place finish. Brett Miller of Greenville, Tenn., finished fourth with Dale McDowell of Chickamauga, Ga., rounding out the top five.

Taking the leading on the race’s initial start, the polesitting Madden was trailed closely by Neat in the early laps. Neat challenged for the lead by ducking inside of Madden on several occasions, especially as the lead cars worked through lapped traffic.

After the second of the race’s two cautions for on lap-26, Madden was able to distance himself from Neat and added to his lead while racing through heavy traffic as the second half of the race ran caution free. Madden cruised in the closing laps, claiming the victory and the $5,353 series championship.

Notes: Madden’s Bloomquist Race Car is powered by a Clements Automotive Racing engine and sponsored by Century Plastics, Hamrick’s of Gaffney, VP Fuels, Allstar Performance, Extreme Cycles and Hoosier Tire South. … Kenny Compton Jr. was running among the top five when slowing with a flat tire to bring out the lap-26 caution. The first caution was for Daniel Baggerly on lap 16. … Madden’s other three victories came at Swaisboro (Ga.) Raceway, East Alabama Motor Speedway in Phenix City, Ala., and Cleveland (Tenn.) Speedway. … Madden finished the tour with just one finish out side the top three. That came in the second-to-last race Friday night at Volunteer Speedway when he finished seventh after slowing while battling for the lead late in the race. … Madden’s previous Southern Nationals titles came in 2007, ‘08 and ’11.