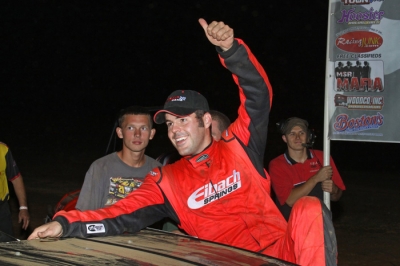 A melee on a lap-25 restart knocked out several drivers when Kirby drifted up the track into Kyle Beard, pinching him into the frontstretch wall. Beard's lame car slowed on the frontstretch and was struck by the cars of Keith Lawson, Curtis Cook, Brandon Smith and Derrick Richter. Cook was taken to the hospital with what was thought to be a broken arm; other drivers were sore but otherwise uninjured. The cleanup took 30 minutes.