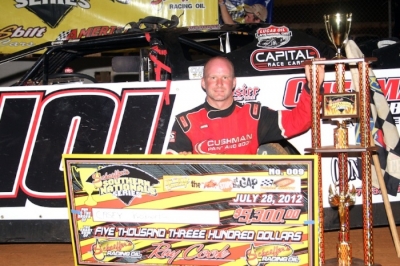 Roberts came out on top for a $5,300 payday and his eighth career victory on a night with twists and turns — and some serious bumps — for the second-to-last event on the Ray Cook-promoted tour. | Video | Slideshow

Mark Douglas of Knoxville, Tenn., finished second followed by Chad Ogle of Sevierville, Tenn., Billy Ogle Jr. of Knoxville and Jeff Maupin of Greeneville, Tenn. Series points leader Chris Madden of Gray Court, S.C., who led laps 17-24 before he lost power on a restart, ended up seventh, his worst on the tour but virtually assuring him his third championship.

With rugged track conditions following afternoon rain and the late hour, officials scrapped consolation races and started the 21-car field by qualifying for the 53-lapper.

Madden bolted from his outside front row starting spot to grab the lead as the cars roared through turns one and two, but a bobble opened the door for the polesitting Roberts to take command. Roberts set a torrid pace, building a lead of more than a straightaway until a lap-12 caution was called when Dillan White came to a stop in turn four.

On the restart, Mike Marlar of Winfield, Tenn., began to challenge Madden for the runner-up spot as Roberts again slipped away from his pursuers. But on lap 17 the rough track surface took its toll when Marlar hit a bump in turn two and had his car jerk sideways, nearly causing the car to roll over.

It appeared Marlar, second to Madden in series points, was done as a wrecker lifted the rear of his car off the track and began to tow it away. But the Bryson Motorsports crew sprang into action on the hoisted car and he returned to the track.

The lead changed hands on the restart when Roberts bobbled in turn four and Madden took over. Another yellow appeared on lap 24, again for Marlar, whose crew again hustled to keep him in the race.

On the restart, it was Madden who had problems when his No. 44 simply failed to go when the green flag waved. With his car stopped in turn two under yellow, it appeared Madden was finished. He even climbed out of his car and gave an earful to a series official.

But Madden, who entered the race with a 36-point margin on Marlar, was able to rejoin the race when his crew frantically went to work and sent him back to the oval just before the green flew again.

Regaining the lead, Roberts led the rest of the way, but not without some tough going in traffic over the final five laps that allowed Chad Ogle and Mark Douglas to close to within striking distance.