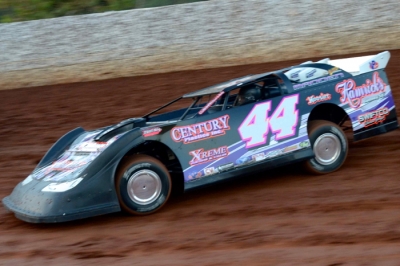 Chris Madden gets up to speed at Cleveland before his $3,500 victory. (mikessportsimages.net)

With a 30-point lead over Mike Marlar of Winfield, Tenn., entering the 10-race tour’s three-race homestretch, Madden did anything but take it easy at Cleveland Speedway. | Notebook | Video | Slideshow

Instead, Madden, 37, of Gray Court, S.C., led every lap of the Thursday’s 35-lap feature, turning back early challenges from Billy Ogle Jr. of Knoxville, Tenn., before running away to his third victory on this year’s tour and padding his points lead as the series heads for its final two races over the weekend.

Madden earned $3,500 in topping Ogle at the finish line. Marlar advanced from his ninth starting spot to finish third ahead of 11th-starting Randy Weaver of Crossville, Tenn., and Aaron Ridley of Chatsworth, Ga.

Starting from the outside of the front row, Madden bolted to the lead on the race’s initial start, but he was soon challenged heavily by Ogle in the opening laps.

Ogle dove under Madden on a couple of occasions in an attempt to take the lead before the race’s first caution on lap nine slowed the pace.

Madden flexed his muscle after the restart, leaving Ogle and the rest of the field to battle for second. Ogle held on to the spot as hard chargers Marlar and Randy Weaver moved up through the field.

All of the race’s four cautions appeared during the first 18 laps, allowing Madden and the other leaders to stay out of lapped traffic for most of the race.

As the race ran green in the second half, however, Madden found himself having to slice through the tail of the field in the closing laps. But the veteran driver was able to always keep at least one or two lapped machines between himself and his closest pursuers in racing to the victory.

“The racetrack was really good tonight and kinda had two lanes there. I seen Billy under me a time or two and had to turn up the wick a little bit,” Maddens said of his early battle with Ogle. “But it was all good. The race car was great.”

Marlar, who has two victories of his own on this year’s tour, intentionally set his car up to run the bottom, but he ran out of time to catch the leaders.

“We had a good car, just not all night,” Marlar said. “(Running the bottom) was really the only option I had so we just over-tightened the car where I could bend it and do whatever I needed to do. We actually might the right call. It was just one of them shorter distance races and you gotta start a little closer some times.”