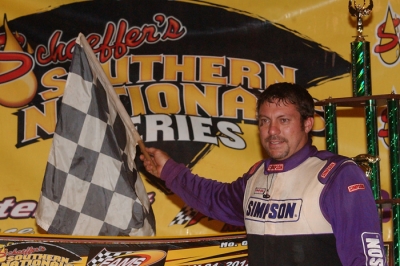 Madden stretched his lead in the title chase to 30 points over runner-up Mike Marlar of Winfield, Tenn., with his series-leading 19th career victory on the Ray Cook-promoted tour.

“Our guys have worked hard and it’s been really hot. They gave me another good race tonight to win with and I didn’t screw it up this time,” Madden said, joking about avoiding a run in a consolation race. “We didn’t get our extra 10 laps tonight. We qualified too good.

“We didn’t make quite the right adjustments we needed to for the feature. We had a little motor issue when we qualified, and I hope we got it worked out.”

Madden started outside the fast-qualifying Marlar on the front row and swept into the lead from the outset, holding the top spot all the way.

“I knew with the track conditions that whoever led the first lap was going to be hard to beat,” Madden said after the 35-lapper. “They had a heckuva racetrack tonight. If they get this thing fixed like this for (Alabama State Championship) and the National (100), they’ll have a helluva race here, that’s for sure. It was just about fixing to starting coming in there and starting winding out and slowing down around the top.”

“We had a really good car, and the outside line was just a little bit more dominant there,” Marlar said. "We had a good car and so did Chris and it was a good race. We had fun there racing in the traffic there.”

Smith, who won the previous series event Sunday in Rome, Ga., felt like he had the car to win the race before his mud-packed right-rear wheel slowed him down.

“I had to run about half-throttle just to kind of keep from shaking my eyes out and just to maintain for third,” he said.

Vic Hill of Mosheim, Tenn., finished fourth and Kennie Compton Jr. of Bland, Va., was fifth in a race slowed by a single caution on the 11th lap when Jordy Nipper’s right-rear wheel came bounding off his car.