Tippen's woes open door for Sitton at I-30 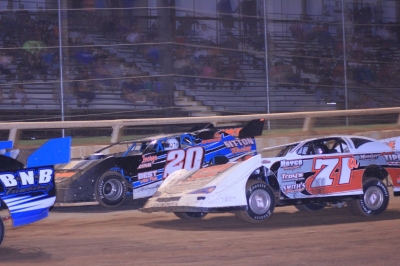 The fifth-starting Sitton’s third SUPR victory of the season is the eight of his career as he took the checkers three seconds ahead of fellow Texan Morgan Bagley of Longview in a race where light rain began to fall in the final laps.

Rob Litton of Alexandria, La., rounded out the top five, taking the championship lead from Tippen by 23 points. Tippen, of Minden, La., ended up 18th in the 22-car field.

Tippen led the first 18 laps before a back-and-forth duel with Sitton for a half-dozen circuits in the 40-lapper. Tippen regained command on lap 24, but when he broke exiting turn four on lap 35, he coasted to a halt on the frontstretch and was pushed off the track.

Notes: Sitton’s Barry Wright Race Car is sponsored by Sitton Racing, Ed George Racing, Erb Racing and Best Auto Parts. ... Runner-up Morgan Bagley rallied on the cushion to get second, challenging Sitton for that spot before Tippen’s departure. ... Bud Mullins, a previous SUPR winner at I-30 this season, came from 19th to finish eighth. ... Chandler Petty, 16, of Austin, Ark., started on the front row but faded early. ... Sean Jones of Mansfield, Texas, who grabbed his first SUPR victory the previous night, was the first retiree in the 23-minute feature slowed by two cautions. ... Next up for SUPR competitors is a doubleheader weekend at Battleground Speedway in Highlands, Texas, on July 27-28.