McGuire earns $7,500 for repeat at Butterball 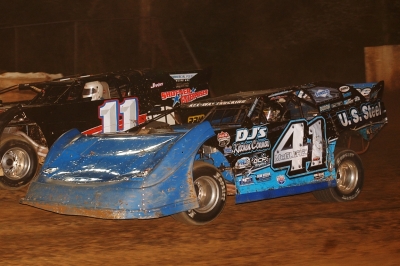 McGuire, who kicked off the weekend with a $3,000 victory in Friday’s Jack Shutts Memorial at Skyline Speedway in Stewart, Ohio, earned $7,500 Saturday for his eighth overall victory of 2012 and his second consecutive victory in Richmond’s unsanctioned special. | Slideshow

Greg Johnson of Bedford, Ind., was the runner-up at the 3/8-mile oval, ahead of third-place finisher Eddie Carrier Jr. of Salt Rock, W.Va. Jason Jameson of Lawrenceburg, Ind., was fourth with 20th-starting Todd Coffman rounding out the top five finishers.

Jeff Watson led at the outset followed by Chris Combs, McGuire, Terry English and Greg Johnson. After a lap-13 yellow for Tim Tungate, McGuire moved up to second, challenging Watson before taking the lead on lap 16. McGuire led the rest of the way while Watson fell from contention in a 40-minute race slowed by three cautions.