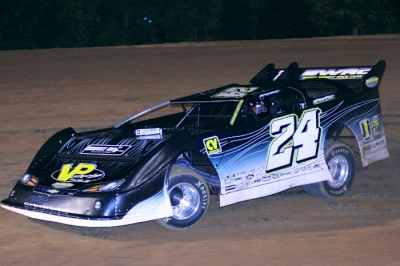 Jones, who has driven both sprint cars and modifieds before giving Late Models a try this season, moved to the lead when Bud Mullins pushed high late in the race, and edged ahead by a single car length at the finish line.

Mullins, the West Monroe, La., driver who scored his first SUPR victory just over a month ago, settled for second after leading the majority of the race.

Former series champion Ray Moore of Shreveport, La., challenged for the lead early in the race, but slid back to third at the finish. Jeff Chanler of Minden, La., was fourth with Tyler Erb of Magnolia, Texas, rounding out the top five.

Notes: Jones has driven modifieds for most of his 22-year racing career, but also claimed a sprint car track championship at Cowtown Speedway in Kennedale, Texas. … The event was the 623rd for the SUPR tour, moving the Louisiana-based series ahead of the Southern All Star Dirt Racing Series as the Dirt Late Model tour with the most sanctioned events. ... Friday’s race was the first leg of SUPR’s weekend doubleheader at I-30. Saturday’s race pays $2,500 to the winner.