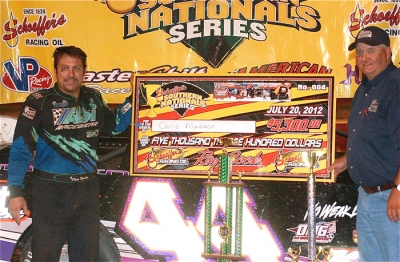 SWAINSBORO, Ga. (July 20) — Leading early in the first three Schaeffer Oil Southern Nationals Series races didn’t work out for Chris Madden of Gray Court, S.C. But he got into the lead just at the right time in Friday’s 53-lapper at Swainsboro Raceway. | Video

Taking the lead from Mike Marlar of Winfield, Tenn., just after a restart with seven laps remaining, Madden went on to his series-leading 18th career victory and stretched his points lead in pursuit of his fourth series championship.

On a track where most competitors stuck with the inside groove, Madden made the outside lane work while battling Marlar on lap 47 and raced to a victory from his 10th starting spot.

“This thing has been awesome ever since we brought it out of the shop,” Madden said of his No. 44 Bloomquist Race Car. "We built this thing and took it to the first race up at Wytheville, Clements Automotive built us a new motor, Scott and Bruce and those guys built us a new car. ...

“We were good. We drew a bad number and went out real late qualifying, the racetrack lost about a second. We were quick in hot laps. I’d just like to thank God, thank all my family, everybody at home, my wife and my kids at home that can’t be here, I love them and just wish they could be here.”

Marlar, who started fourth, settled for the second spot while polesitter and fast qualifier Casey Roberts of Toccoa, Ga., was third. Billy Ogle Jr. of Knoxville, Tenn., and ninth-starting Clint Smith of Senoia, Ga., rounded out the top five in a race where just eight drivers finished on the lead lap.

Roberts took control at the outset while Madden worked his way to the front, moving up to sixth after just five laps and cracking the top five later as Marlar hounded the leader.

When Roberts got bottled up behind a pair of slower cars, Marlar went underneath exiting turn four on the 16th lap and threaded the needle between slower cars on the next lap to slip away from Roberts.

Things tightened up among the frontrunners in the final 15 laps with Marlar facing more slower traffic with Roberts and Madden hot on his heels. Madden went to the inside on lap 43 to grab second from Roberts, and he challenged Marlar as he tried to put a lap on Vic Hill.

Madden nearly fell back to third behind Roberts, but Daniel Baggerly slowed out of turn two on the 46th lap to reset the top three with Marlar leading Madden and Roberts. The restart was scuttled when Dillon Wood spun exiting turn two, but on the ensuing restart, Madden jumped to the outside entering turn one and ran side-by-side with Marlar before edging ahead to lead lap 47.

One more caution slowed the caution, but Madden held on the rest of the way for the victory.