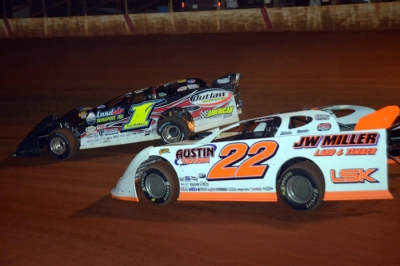 CHATSWORTH, Ga. (July 19) — Restored to the lead when series points leader Chris Madden was penalized for jumping a lap-13 restart, William Thomas of Phenix City, Ala., led the rest of the way Thursday at North Georgia Speedway for his first career victory on the Schaeffer Oil Southern Nationals Series. | Slideshow | Video

The third-starting Thomas, who originally slipped underneath polesitter Vic Hill to take the lead on the ninth lap, earned $3,500 in the third leg of the 10-race series promoted by North Carolina driver Ray Cook.

Madden, the three-time series champion from Gray Court, S.C., settled for second while Hill, of Mosheim, Tenn., finished third at the third-mile oval that reopened after a brief closure. Mike Marlar of Winfield, Tenn., and Billy Ogle Jr. of Knoxville, Tenn., rounded out the top five in the 35-lapper.

“This is awesome,” the 25-year-old Thomas said in victory lane. "On that restart there, he just blew by me down the straightaway. We got that little spec motor in, and I guess he might’ve jumped a little bit, I don’t know.

"He pulled up beside me pretty quick there. I thought the race was over with there, but they gave us our spot back. I didn’t make that call. I hate that for him. I felt like I had the best car here tonight.”

At the outset, Hill took the lead from the pole position with Thomas quickly moving past Marlar and into second on the second lap. Thomas hounded Hill through the opening laps and took advantage when the frontrunners hit lapped traffic, slipping underneath Hill on the ninth lap in turn four to take command.

After a lap-13 caution for Brian Reese, who stopped in turn three — and another yellow on the restart when Kennie Compton jr. stopped in turn one — Madden made his move. He got a run off turn four coming back to the green and ducked under Thomas going into turn one.

On a lap-20 caution for debris, officials dropped Madden back to the third spot for jumping the previous restart. Thomas was back out front and stayed in control the final 15 laps for the victory.

In victory lane, the fifth-starting Madden was less bothered by the on-track ruling than by series rules that allow spec motor cars to get extra downforce with 12-inch spoilers, 4 inches taller than cars like Madden’s with open-competition powerplants.

“We had a good car, a car to win the race,” Madden said. "William was running a spec motor, and he done a great job. He had probably the fastest spec motor car I’ve seen here. But we had the fastest Late Model car here to win a Super Late Model race.”

The third-finishing Hill, who said his car was a little too lose getting into the corners, agreed with Madden.

“Running against these big spoilers on slick tracks — congratulations to (Thomas), he did a good job for sure — but I’d like to have all 12-inch spoilers if that’s what we’re going to have,” he said.

Notes: Thomas drives a MasterSbilt Race Car sponsored by Austin Trucking, J.W. Miller Lander & Timber, LSK, Shorty’s Motorsports and Rick Hixson Fabrication. ... Thomas was a late arrival and the last of 36 entries. ... Chris Madden leads the series with 588 points over Mike Marlar and Vic Hill, tied with second with 584 points. ... Madden thanked Hill for racing him clean. "I passed him twice on the outside and he could’ve run me into the fence both laps. I appreciate people like him racing,” Madden said. “That’s what’s fun.” ...ï¿½ Dale McDowell, driving the No. 41 previously driven by Ty Dillon, retired after just three laps. .. Among drivers failing to make the feature lineup: Bo Eaton, Preston Graves, Jacob Grizzle, Brandon Dewitt, Tyler Millwood and Kenneth Howell. ... The series moves to Swainsboro (Ga.) Raceway on Friday for a 53-lap, $5,300-to-win event.