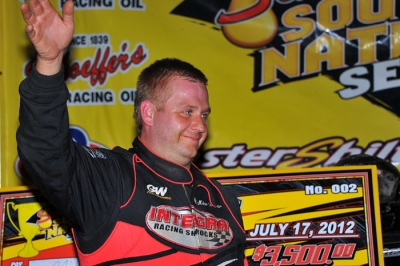 Marlar’s first career victory on the Ray Cook-promoted tour paid $3,500 as he also captured his first victory at the historic 4/10-mile oval that once hosted major NASCAR events. | Video | Slideshow

“I haven’t been here but a few times, and the times I have come the Mountain hasn’t been very nice to me, but tonight we prevailed and had a really good car there,” said the 34-year-old Marlar, who powered around Madden exiting turn four. “Sometimes when you’re leading races like that in you’re all that traffic, it’s really yours to lose. It’s really easy to pick a wrong choice. All I’ve gotta do is react to what he does, so I didn’t really have a decision. I hate that there for Chris, but we’re also here to win, and that’s how it goes sometimes.”

Madden, the three-time and reigning series champion, finished second while Kennie Compton Jr. of Bland, Va., was third. Billy Ogle Jr. of Knoxville, Tenn., recovered from an early scramble to finish fourth and Vic Hill of Mosheim, Tenn., rounded out the top five.

Madden took firm control early in the 35-lapper and appeared as if he might cruise to victory, but things tightened up when the frontrunners faced slower cars. Marlar began stalking the leader before the midpoint, drawing closer when Madden tried to lap Mark Vineyard.

With Madden following Vineyard in the low groove in turns three and four, Marlar used his high-side momentum to easily sweep into a lead he’d never give up, slipping by Vineyard himself with a low-side move on the next lap.

Three cautions slowed the action, the significant on the second lap when Skip Arp and Ty Dillon touched between turns one and two, and Dillon spun along with Ogle. Arp and Dillon retired. Other yellows fell for single-car slowdowns for Mack McCarter (lap 21), David Crabtree (lap 22) and Donald Bradsher (lap 26).

Notes: Marlar’s Bryson Motorsports Rocket Chassis is sponsored by GW Performance and Hoosier Tire. ... Madden’s 14.954-seconds fast time lowered the 4/10-mile oval’s track record. ... Daniel Baggerly rallied from his 20th starting spot to finish ninth. He's been getting help in the pits from Hall of Famer Freddy Smith. ... Each feature starter earned at least $450 except for Paul Davis, who took an emergency provisional. ... Seventeen drivers attended the first two events. ... Drivers failing to make the main event: Mike Weeks, Jacob Grizzle, Joey Coulter and Jim Gray. ... Gray broke a rod in his primary engine and is ending his tour run. ... Jacob Grizzle broke a rocker arm in his consolation race. ... The series takes a night off before returning to action Thursday at North Georgia Speedway in Chatsworth, Ga., for another $3,500-to-win event.