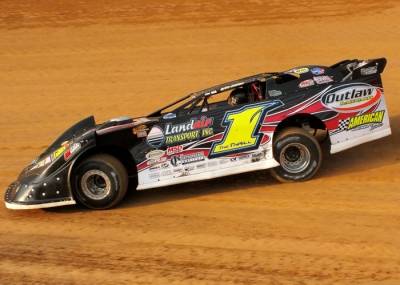 RURAL RETREAT, Va. (July 16) — Vic Hill of Mosheim, Tenn., struck the first blow on the Schaeffer Oil Southern Nationals Series, leading the last 11 laps at Wythe Raceway for a $3,500 payday Monday in the opener of the 10-race series promoted by Ray Cook.

Hill moved up to challenge three-time and reigning series champion Chris Madden, who led comfortably from the pole the first half of the race, amid traffic, darting underneath him entering turn three on the 25th lap and leading the rest of the way. | Video

“Tonight’s a good night and a good way to start it out,” said Hill, who won last year’s series finale in Tazewell, Tenn., and notched his third career victory on the series. “Chris is a great driver. Him and I have been racing for a few years, and now I’ve gotten to where I’m competitive with him. It’s just fun to race with somebody that’s as good as he is, and you’re side-by-side and juking around lapped traffic. You take some chances and sometimes it works out, and I definitely took a few tonight.”

Madden and Austin Dillon of Welcome, N.C., started on the front row of the 22-car field with Madden leading comfortably in the early stages over Dillon, Hill and Marlar.

Four caution periods an early eight-lap stretch slowed the action with first Ty Dillon spinning between turns one and two followed by spins for Bubba Russell and Mack McCarter. Hometown driver Daniel Baggerly slowed on the backstretch on the 12th lap to bring out another yellow.

Madden pulled out of comfortable margins on each restart while Hill continued to work on the second-running Dillon. Hill pulled alongside Dillon on the 16th lap and made the pass, then set his sites on Madden.

Hill moved within striking distance just past the midway point, then pulled right on Madden’s rear deck on lap 25 when the leader’s momentum was slowed by lapped traffic. With lapped cars directly in front of Madden, Hill made his move dropping to the inside and racing up off the fourth turn he powered into a lead he would never relinquish.

With Hill in control, Dillon faded out of the top five before the final caution on lap 30 as flames briefly ignited under Jordy Nipper’s hood as he stopped high on the banking between turns three and four.

With five laps remaining, Hill kept Madden in check, edging away for the victory as he tries to dethrone Madden.

“You’ve gotta go day-by-day in this. We go to Smoky Mountain (on Tuesday), and we run well there, and Chris runs well. When we get to Screven and Swainsboro will be the test of Vic,” said Hill, who is a three-time winner at Smoky Mountain Speedway in Maryville, Tenn., this season. “You always feel confident when you’ve had as good as season as we’ve had at that racetrack ... but like I said, you can’t count out anybody at anytime, and if you let your guard down, they’re going to beat you.”

Notes: Hill’s Warrior Race Car has a Vic Hill Race Engine and is sponsored by Landair Transport, Pilot Travel Centers, Preferred Sandblasting & Painting, Outlaw Race Parts and The Orthopaedic Institute of Western Kentucky. ... Hill holds the track record at Wythe with a 15.863-second lap. ... Winning support-class races were Mike Keith in super street, Chris Martin in pro mini, and Dillon Huffman in U-car. ... Drivers failing to make the Late Model feature lineup: Jake Eaton, Jacob Grizzle and Jim Gray. ... Grizzle had ignition problems and scratched for the night. ... Mack McCarter hit the wall in qualifying, but made quick repairs and got one time trial lap at the conclusion of the session. ... Next up for the 10-race tour is Tuesday’s $3,500-to-win event at Smoky Mountain Speedway.