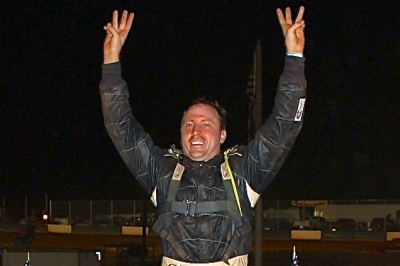 RICHBURG, S.C. (June 14) — Dark skies prior to Saturday evening’s Carolina Clash Super Late Model Series event served as a foreboding for things to come later that evening at I-77 Speedway. It wasn’t rain that the ominous clouds brought, but instead a dominant Luke Roffers storming to his third series victory of the 2012 season. | Slideshow

Roffers, the regional tour's current points leader, led the 40-lap feature flag-to-flag to top Johnny Pursley of Clover, S.C., for a $4,000 victory in the 13-year-old tour’s first-ever visit to the 4/10-mile oval located just across the state line from Charlotte, N.C.

Ross Bailes, also of Clover, advanced from his 11th starting spot to finish third after surviving a mid-race run-in that took out contenders Wayne Hughes of Ghent, W.Va., and Scott Autry of Fayetteville, N.C. Brandon Overton of Appling, Ga., was fourth at the finish while Thomas Hedgpath of Columbia, S.C., advanced from 18th to round out the top five finishers.

“The track was nice and smooth”, Roffers said after his victory. “It’s kind of narrow, but other than that it was a good track to race on. It got a little bit slick, which is nice, I like to race on tracks like that.”

Frequent cautions slowed the race, but despite the many restarts challengers could never capitalize and mount a serious charge for the top spot. Pursley, Hughes and Autry all threatened on a few occasions, but Roffers pulled his red No. 21 to a comfortable margin after each challenge.

With the lead secured, the best battles to watch were for the second position on back. The most significant incident of the evening involved the cars of Autry, Hughes, and Bailes around the halfway point.

Exiting turn four, Autry was under Hughes for the second position. Fourth-runing Bailes got a strong run off the corner and made it three-wide under Autry.

Real estate on the frontstretch became a precious commodity very quickly. All three cars bounced off each other with Hughes and Autry both eventually spinning just before the entrance of turn one.

Hughes could be seen visibly using head and hand gestures to express his displeasure with Autry as the two wound up alongside each other’s driver’s side window openings.

Luckily, no other cars were seriously damaged in the mishap and everyone involved was able to continue on. Autry would fall out a short time later with engine problems.

“The 1H (Hughes) washed up a little bit. I was just going to try to pass him,” Autry, the 2002 Clash champion said of the incident. “Ross must have got a super grip, and just thought he could make the pass without no contact. I don’t know. He just washed me right up into the 1H and I was wedged. The 1H was trying to keep from going up into the wall and I was trying to just keep from wrecking.”

Notes: Roffers drives a Rocket Chassis with sponsorship from Wolf-Pack Racing, Cal-Les-2 Transport, Wayne Roffers Trucking, Chad Roffers Trucking, Roffers Wildlife Studio and Wisconsin Lock & Load. … Hedgpath earned the Safety-Kleen Hard Charger Award for his run through the field. … Roffers extended his lead over Pursley in the series standings. … Carolina Clash competitors take the rest of July off before getting back to action with three events from Aug. 11-18.