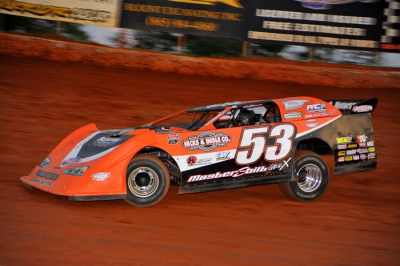 Ray Cook gets rolling at Smoky Mountain, where he won for the second straight Saturday. (mrmracing.net)

Cook, of Brasstown, N.C., was coming off a victory an SRRS victory at the 4/10-mile oval one week earlier while Hill, of Mosheim, Tenn., had led every lap of the three special events this season at Smoky Mountain. | Video | Slideshow

It was the polesitter Cook who won the showdown, outrunning the seventh-starting Hill for a $5,000 payday in the U-Drive Auto Firecracker event. Hill settled for second with Billy Ogle Jr. of Knoxville, Tenn., in third. Brett Miller of Greenville, Tenn., and outside front-row starter Chris Madden of Gray Court, S.C., rounded out the top five finishers.

The 50 lap feature got off to a rocky start with a huge crash on the backstretch before a lap was complete. The chain-reaction accident included at least nine cars with some eliminated from the race.

Once things got rolling, Cook powered into the lead ahead of a furious battle for the opportunity to serve as his closest pursuer. Madden, Miller, Ogle and Hill ran nose-to-tail and side-by-side for multiple laps while Cook’s advantage grew with each passing circuit.

Just before halfway, Ogle and Hill finally established themselves as Cook’s greatest threats as Madden and Miller faded slightly. However, Cook had pulled so far in front that only a caution would allow for any challenge to be made.

On lap 35, Stacy Boles stopped in turn four to draw the yellow, allowing the field to close right up behind the Tarheel Tiger. But Cook quickly darted away again on the restart.

Another yellow flag at lap 42 when Madden and Mark Vineyard tangled on the frontstretch allowed Hill one more chance to extend his winning streak, but Cook would’ve allow it in completing the victory.

Notes: Cook’s MasterSbilt Race Car has a Race Engine Design powerplant and sponsorship from Hicks and Ingle Construction, A+ Moving and Storage and D&R Motorsports. ... Cook will be back at Smoky Mountain on July 17 as promoter with his Schaeffer Oil Southern Nationals. ... The victory was Cook’s first on the Ultimate Series. ... Cook has eight victories overall in 2012. ... Adam Beeler won the night’s Crate Late Model feature. ... The Ultimate Series is scheduled to return to action July 15 with a $5,000-to-win event at 311 Motor Speedway in Madison, N.C.