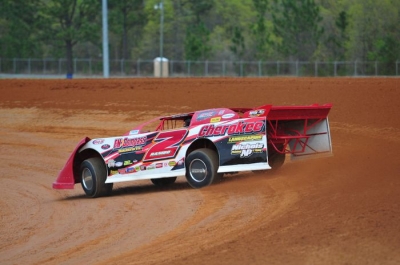 Weeks and Franklin started on the front row by virtue of their dash victories, and Franklin got the jump and went on to his first series victory since winning last Aug. 4 at Fayetteville. “My car was good tonight,“ Franklin said. ”It was really on a rail.”

Said the polesitting Weeks: “Rambo was better tonight. We had a good race car, but he was just a little better.”

Notes: Franklin's Barry Wright house car is sponsored by En Compass and Cherokee Landscaping. ... The event was the first of the season on the series after four March events were postponed or cancelled by inclement weather. ... Ricky Boahn was running among the top five when he fell out after drawing a lap-37 caution. ... Jordan Bland, Tim Allen and Shane Riner failed to make the feature lineup. ... The series heads to Travelers Rest (S.C.) Speedway for a $4,000-to-win event on April 26.

Correction: An earlier version of this story listed incorrect hometowns for Doug Sanders and Scott Neighbors.