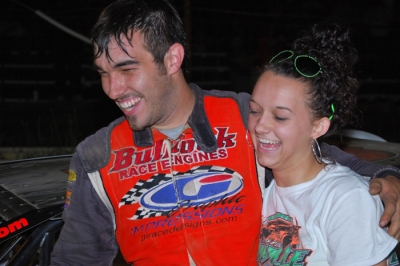 Dustin Linville and his wife Shae celebrate at Wartburg. (photobyconnie.com)

“The track was awesome tonight and I’ve got a good crew,” Linville said. "Jackie Boggs has helped me out a lot. I have to thank him ... them boys put me a really good car together. That’s the fourth time that car’s been on the track, and man, I’ve never been that fast in my life.

“I swear, I don’t believe I could be any happier if I won the World 100, this is crazy,” Linville added.

Tipton, who led the first 22 laps, didn’t finish and seventh-starting Ray Cook of Brasstown, N.C., who challenged Linville for the lead after lap-35 restart, ended up 13th after suffering a flat tire during the sixth and final caution on lap 46.

Ogle would’ve started on the pole of the main event, but when he failed to go to the scales after his dash victory, that elevated Linville to the top spot. Yet Tipton’s high-side momentum carried him into the early lead while Linville, Mike Weeks, Ross White and Aaron Ridley gave chase in the early going.

Tipton began lapping slower cars after just six circuits, but Linville never let him get out of touch in stalking the leader through the first half of the race. Linville made his winning pass on the 23rd lap, getting a run off turn four and sweeping around Tipton at the flagstand.

Tipton answered by sliding back out front in turn two as the frontrunners battled traffic, but Linville dove low in turn three. The leaders banged together and Linville slipped ahead exiting turn four as Tipton had to steady his out-of-shape machine.

From there, Linville stayed in control through a series of cautions, first holding off Cook and then keeping the sixth-starting Ogle at bay. Ogle took a final stab at Linville in turn four on the last lap, but the move fell short.

Notes: Linville’s Swartz Race Car has a Bullock Race Engine and sponsorship from McElliott Trucking, Benton Auto Body, G.A. Parsons Trucking and 4B Motorsports. ... Linville notched his second SRRS and USDCS victories. ... The first caution appeared on the 12th lap for Claren Belcher's spin. ... Tommy Carlton slowed on lap 24. ... Randy Todd drew the third yellow when he stopped. ... Michael Asberry spun in turn four for a lap-31 yellow. ... A six-car scramble on the lap-31 restart triggered a red flag. ... On lap 35, Anthony White got into the turn-four wall and collected David Webb among others; White's car landed atop the right front of Webb's machine. ... The final yellow appeared on lap 46 when Adam Beeler slowed on the backstretch. ... Among drivers failing to make the feature lineup: Darrick York, Ruben Mayfield and Jason Manley. ... The United Super Dirt Car Series returns to action July 7 with a $2,500-to-win event at Brownstown (Ind.) Speedway. ... SRRS competitors return to action July 7 at Sugar Creek Raceway in Blue Ridge, Ga.