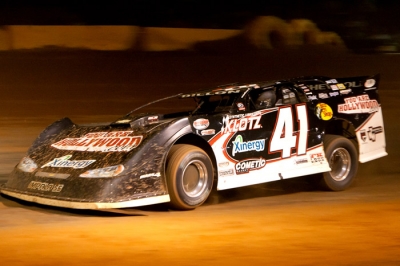 “The car was good, but my hat’s off to John and Johnny Pursley tonight,” said McDowell, who drove teammate Ty Dillon’s No. 41. “This race was about their father and grandfather. It was pretty neat with Johnny starting up there next to me (outside of row one). I lost my mother last year, so it’s pretty special when you honor someone like that.

“But the car was really good. Shane, my brother, and Shawn, and all the guys did a great job. We’re in Ty’s car. I wrecked mine last week at Lernerville, so Ty had a car there. So everything went right. Qualifying went OK, and leading that first lap is important.”

At the drop of the green flag McDowell outran Pursley to the first corner and secured the top spot off of turn two. Behind them, last year’s race winner Ross Bailes of Clover, S.C., lost the third spot to Casey Roberts of Toccoa, Ga., in the first couple of laps.

Following the first caution on the seventh lap, McDowell again got the jump over Johnny Pursley. Brian Ledbetter and John Pursley tangled off of the second turn, which brought out the yellow again.

The yellow waved for a third and final time on lap 13. Shortly after that restart the best battle on the track was a for fifth among Chris Madden, Dennis Franklin and Jeff Smith. The three-way fight for the position brought the grandstand crowd to their feet. Madden slid high and Franklin and Smith both drove to the low side past him.

The track visibly began to rubber up prior to the field taking the halfway sign from the flagger. As the track blackened, Johnny Pursley was able to run into the corners deeper for a few laps and close the distance on McDowell. But McDowell’s machine rotated through the corners well and he maintained his advantage despite his right-rear brake rotor glowing orange.

“I was riding the brake to keep the car really straight,” McDowell said. “It was just for tire wear because I felt like it was really good on the tires.”

At the checkered flag, McDowell had a half-straightaway advantage on Pursley while Bailes, Roberts, and Franklin rounded out the top five.

Notes: McDowell’s Warrior Race Car is sponsored by Klotz, You Are Hollywood and Xinergy. ... Johnny Pursley maintained his series points lead. ... The tour returns to action at Cherokee on Aug. 4 for the 28th annual Stick Elliott Memorial.