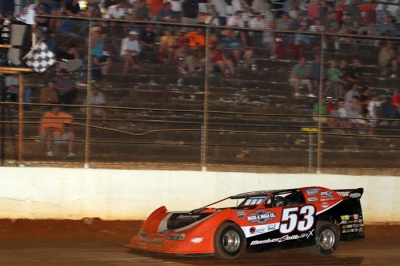 SEYMOUR, Tenn. (July 2) — They say cats don’t like water, but the Tarheel Tiger proved he was on cool cat amid threatening rain Monday at 411 Motor Speedway.

With ominous storm clouds overhead and lightning flashing all around the racetrack, Ray Cook of Brasstown, N.C., led all the way for his second straight victory on the Southern Regional Racing Series. Cook, the all-time winningest SRRS driver with 14 victories, earned $3,000 in the Showdown event that’s the fourth of five races leading up to the Fourth of July. | Video | Slideshow

Billy Ogle Jr. of Knoxville, Tenn., who started outside the front row alongside Cook, finished second but never serioiusly threatened the winner while Skylar Marlar of Winfield, Tenn., survived a second-lap infield detout and advanced four positions to finish third. Reigning series champ Josh Putnam of Killen, Ala., and Randy Weaver of Crossville, Tenn., rounded out the top five in the 40-lap feature.

Cook was in control the entire distance. The only real question was whether or not the race would be able to finish as the weather closed in and a few raindrops began to fall against a backdrop of spectacular lightning flashing across the sky not far from the track.

A series of caution flags caused some anxiety just before the race’s halfway mark as it took longer than track and series officials would have liked to get to the halfway mark, which would have made the race official had the rain intensified.

However, the race finally go into a rhythm and almost ran clean and green to the finish after a lap-17 restart. With the laps clicking by under green, Cook found himself mired in heavy traffic on the speedway’s tight layout but Ogle was never able to close the distance on the race leader.

In the meantime, Tommy Kerr, Putnam, Marlar and Weaver waged a tremendous battle for top-five spots running side-by-side while Cook and Ogle pulled away.

A lap-38 caution for fluid on the racing surface forced a green-white-checkered finish, but no one was able to challenge Cook over those final two circuits.