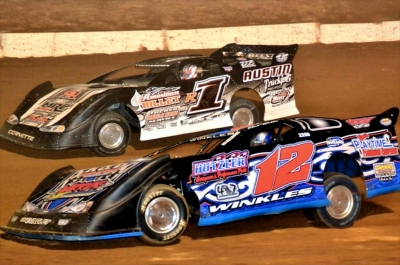 WHEEL, Tenn. (June 29) – Despite fading to an eighth-place finish late in Thursday’s 40-lap Southern Regional Racing Series event at Duck River Raceway Park, Chad Winkles was happy with his performance. After setting the overall fast time on Thursday and starting from the pole in the feature, he knew that if not for a deflating right rear tire, he could have easily finished among the top five.

Winkles, of Falkville, Ala., backed up Thursday’s solid run with a third-place finish in his family-owned car Friday night. He collected $1,450 in race winnings and an additional $200 for setting quick time on Thursday for a pretty good start to the weekend.

“It’s just amazing to run in the top three in this SRRS deal, especially two nights in a row,” said Winkles.

Winkles was eyeing an even better finish late in Friday’s event. After breaking away from a four-car battle between himself, Jeff Watson, Tim Busha and D.J. Myers, he abandoned the bottom grove and ran down second-running Josh Putman with 10 laps left in the feature.

“There at the end I was able to squeeze Putnam ... not really squeeze him, but keep him down and keep my motor running,” he added.

D.J. Myers, of Greencastle, Pa., was a little out of his element on Thursday night as he made his first-ever visit to the quarter-mile Duck River Raceway Park. Myers, who competes in a chassis built by PPM Racing Products, which is based in Rockwood, Tenn., decided to venture South for a couple days.

He was parked beside Skylar Marlar, who also drives a PPM-built chassis.

Following Thursday’s race, when Myers finished 10th, he was wondering what the track would be like 24 hours later. Both Myers and Marlar were considerably better on Friday night as both drivers put their cars in the quick-six dash.

Both also ran in the top five early before slipping back.

“In the dash, the limiting chain (on the left rear) was hung up and I couldn’t point it in the same direction twice,” said Marlar. “You could put a cone out there and I couldn’t hit it. We got that fixed and put American Racer (tires) on it and that’s all we did to it.”

Marlar was running third when a flat tire sidelined him on lap 19. Myers ran among the top five for half the race before fading to seventh at the finish.

“He left his Hoosiers on,” said Marlar. “He probably would have been better if he switched to the American Racer, too.”

On Thursday night, Ronnie Johnson, of Chattanooga, Tenn., seemed to be behind the eight-ball for much of the event. A suspension part broke in practice, sending the team scrambling to make repairs.

Then, after winning the dash for the top eight qualifiers, Johnson was some 30 pounds light at the scales and dropped from the pole to eighth on the starting grid. He rallied to finish third.

At the end of a long night, Johnson sat cooling off in front of fan in his hauler. After he gave up the pole, he’d almost forgotten about all the work his team went through to claim a podium finish.

“Either the panhard bar heim broke, a four-link bar broke and the driveshaft broke ... I’m not sure which one was first,” said Johnson. “Actually I had forgotten about that.

“I had the fast time in my group and the luck of the draw put me on the front row of the dash. Then I was a few pounds light at the scales. They may have made me put another 50 pounds on for the 525 (crate engine). I don’t know because I don’t run enough with this series.”

On Friday, Johnson started deep in the field, but motored from 21st to an eighth-place finish.

Former Duck River Speedway track champion Daniel Miller was scheduled to start 25th in the main event on Friday night, but nearly missed the race when his motor’s oil pump belt broke during the parade lap.

Miller, of Lynchburg, Tenn., made his way back to his pit stall and hopped into his Limited Late Model car and tagged the rear of the field in time to start the race.

Miller improved 12 spots to finish 13th. Unfortunately, his limited Late Model car is outfitted with a two-barrel carburetor, which limited his horsepower.

“I could get through the corner pretty decent, but I couldn’t keep up down the straightaway ... not enough juice,” said Miller, who scratched from the Limited Late Model race.

“I didn’t think it was right for me to (run the same car) in both races.”