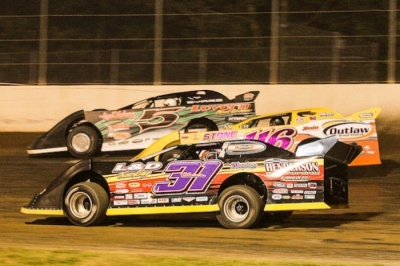 Weaver, who rallied from his 13th starting spot Saturday to win at Whynot Motorsports Park, inherited the lead when polesitter Klint Byars of Carrollton, Miss., retired with mechanical problems after building a commanding lead. Weaver led the rest of the way to become the first two-time Southern All Star winner this season. | Slideshow | Video

Consolation race winner Rodney Wing of Meridian, Miss., rallied to second and challenged Weaver late in the 50-lapper. But Weaver held on, focing Wing to settle for the runner-up finish.

Robbie Starnes of Dayton, Texas, was third with Scott Creel of Franklinton, La., and Neil Baggett of Shannon, Miss., rounding out the top five finishers at the 3/8-mile oval.

The race was slowed by five cautions, with the first coming 29 laps into the race when hometown driver Brian Rickman slowed with a flat tire. Mike Weeks of Friendsville, Tenn., spun in turn three one lap later to cause the second caution.

Mechanical woes for Larry Boutwell of Baker, Fla., slowed the pace with 35 laps complete. To false starts on the ensuing restart led race officials to use single-file restarts for the remainder of the event.

Notes: Weaver’s GRT Race Car is powered by a Cornett Racing Engine and sponsored by Outlaw Race Parts. ... Weaver has 16 career Southern All Star victories. ... Klint Byars also led at Whynot, but ended up third after clipping an infield tire barrier and breaking a spindle. ... Next up for the Southern All Stars is the $3,500-to-win B.J. Parker Memorial on June 9 at Talladega Short Track in Eastaboga, Ala.