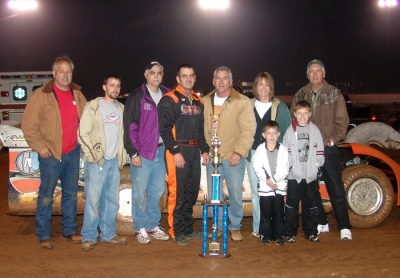 Ray Moore and his supporters in victory lane. (J.D. Long)

Mack took the lead from the outset, but was hampered by power steering failure after 10 laps. Prince took the lead on a restart, then Wallace took command and led three laps midway through the race. Prince returned to the front in the tussle while Moore rallied toward the front despite nearly rolling over after getting too much bite in turn four. Moore gathered up his car and three laps later took a lead he'd never give up. The reigning O'Reilly SUPR champ said it was "hard to be consistent because it was so rough, but I knew the car was fast."

Notes: Runner-up Joey Mack was in back in action after undergoing back surgery 10 weeks earlier. "We came in tonight with the intention that if we had to take a provisional and make a lap, we'd just do that, and I'll be darned if we didn't lead about half of the race," Mack said. ... Kyle Beard's race ended on the 14th lap when he damaged his car by crashing into tire barriers in turns three and four. ... Jon Kirby's 16th-to-seventh run netted him the Larry Shaw Hard Charger award. ... Among drivers failing to make the feature: Allen Tippen, Kyle Cummings, Ross Camponovo and Keith Craft. Craft's car was damaged when he went over the turn-two banking in the first heat.