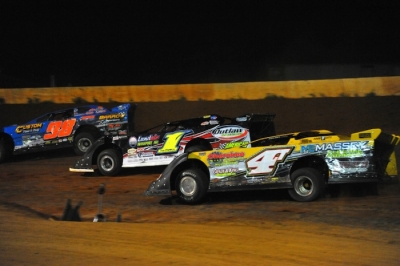 MARYVILLE, Tenn. (May 26) — As a young Dirt Late Model driver at Smoky Mountain Speedway, Vic Hill of Mosheim, Tenn., remembers a few rough nights. “I cut my teeth down here in the ‘90s, and did my fair share of tearing up stuff,” Hill said on Saturday night.

That was then, and this is now.

Winning his third straight visit overall to the historic 4/10-mile oval, Hill topped 35 qualifiers and led all 40 laps for a $4,000 payday on the Ultimate Super Late Model Series.

"We’ve got this place figured out,” said Hill, who dominated a Southern All Start event at the same track six weeks earlier.

Although a minor mechanical problem kept him from racing in Ultimate’s Friday night event at 411 Motor Speedway, Hill had no problems at Smoky Mountain in cruising to victory.

“We went home and worked on things, and came back here and made up for it,” he said.

Hill stretched his lead to comfortable margins most of the way, but runner-up Tommy Kerr of Maryville gave him a few challenges amid lapped traffic.

On the 15th lap, Hill was trapped behind the cars of Casey Barrow and Robby Moses. As he patiently waited for those drivers to sort out their own race, Kerr closed right to the rear of Hill’s machine.

“Finally I could hear Tommy, and I thought, ‘I’ve gotta go.’ I gave it a little bit of extra power there just for a second, and like I said, the car was really good,” Hill said.

Hill extricated himself from the track and pulled away again,while Kerr fought of several challenges from his Blount Motorsports teammate Billy Ogle Jr. of Knoxville. Ray Cook of Brasstown, N.C., finished fourth and Ivedent Lloyd Jr. of Ocala, Fla., rounded out the top five in a race slowed by four cautions.